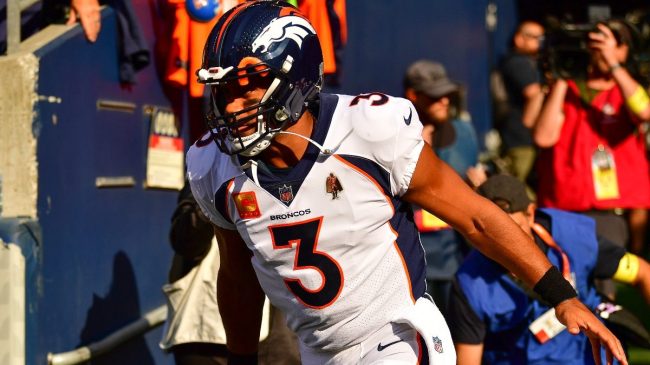 The Seattle Seahawks are taking on the Denver Broncos to kick off Monday Night Football. Russell Wilson returns to Seattle and he’s been given a rather cold welcome by the fanbase. It’s been a sight to behold, especially considering how much Wilson has done for the city of Seattle.

First, it happened in the pregame and it’s continued throughout the evening so far. ESPN shares a clip of the Seahawks faithful booing Russell Wilson as the Broncos head back to the locker room before kickoff.

🗣️ IT'S LOUD IN SEATTLE

Russ continues to get booed in his return to Lumen Field. pic.twitter.com/UXp2ZpChxs

It’s a bit weird to hear how many are booing the former Seahawks quarterback. Sure, he’s playing with the Broncos now, but Russell Wilson played a large role in Seattle throughout his tenure with the club. The NFL Twitter account even sent out a thread of everything Wilson has done for the team, fans, and city before getting traded to Denver.

Super Bowl champion. Walter Payton Man of the Year. Nine Pro Bowls. @DangeRussWilson made his mark on the city of Seattle.

Russ’s contributions both on and off the field during his time with the @Seahawks were endless. (THREAD 🔽) pic.twitter.com/HuRXyqRZMY

In just his second season in 2013, Wilson led the Seahawks to a 13-3 record. After beating the Saints and 49ers in the playoffs, Russ had a date with Peyton Manning and the Broncos in Super Bowl XLVIII.

On top of that, Wilson is the best quarterback in Seahawks franchise history. With multiple playoff appearances and nearly winning a second Super Bowl for the organization, you’d think Seattle would appreciate their future Hall of Fame player a bit more than they’re showing.

Wilson and the Seahawks made it back to the playoffs in six of his last eight years on the team, including another Super Bowl run in 2014.

Russ has thrown for over 7,500 yards and 118 TDs more than any other Seahawk. pic.twitter.com/auJAaMzcca

If you’re a Seahawks fan, how can you boo this man? In addition to his NFL accolades, Russell Wilson was a standout citizen in the city of Seattle. He visited the children’s hospital nearly every Tuesday during each season, created a charity foundation with his wife Ciara, and won the Walter Payton Award in 2020 for his contributions off of the field.

Russell made an even greater impact in the city with his jersey and pads off.

Among his many contributions in the community, Wilson visited the Seattle Children’s hospital just about every Tuesday during the season. pic.twitter.com/7PtyDcIVKa

We’ll see how this game plays out, but Russell Wilson might go off against his former team now that he’s the quarterback of the Broncos.