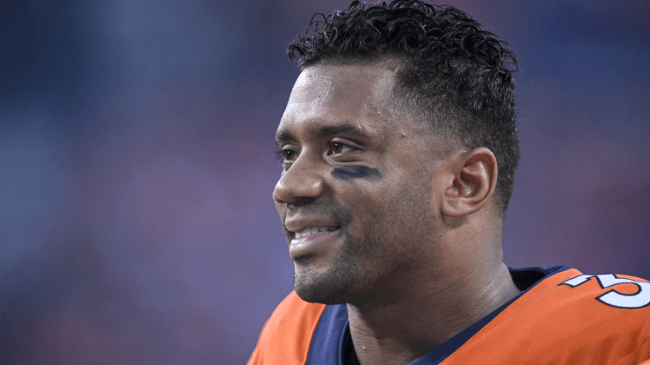 Monday night marks the return of quarterback Russell Wilson to Seattle, a place where he spent the first 10 seasons of his career. The Pro Bowler led the Seahawks to a Super Bowl victory back in 2013 but was traded to Denver this past offseason.

Now, he’ll being playing on the opposing sidelines for the first time in Lumen Field. The Broncos and Seahawks open their 2022 campaigns in primetime with Denver making the trip to the West Coast.

Many wonder what Wilson will look like in his Broncos debut.

If his pregame getup is any indication, he will show some flash on the football field. The passer showed up to the facility rocking a shiny bright green tux. Many on social media have been quick to weigh in.

Fans were quick to respond to seeing Russell Wilson’s gameday tux ahead of Monday night’s season opener. Take a look at the immediate reaction on Twitter.

Who wore it better? pic.twitter.com/bnnLqkeFYR

These fans compared Wilson’s getup to a prom suit.

“I wore a mint green suit to prom, Russ wearing one to his funeral.”

I wore a mint green suit to prom, Russ wearing one to his funeral.

A couple other posters compared his getup to that of a Motown band. This NFL viewer asked, “Why you dressed like a Temptation?”

One fan referenced a scene from the movie Back to the Future, saying, “Enjoy playing at the Enchantment Under The Sea dance. Say hi to Marty for me.”

Enjoy playing at the Enchantment Under The Sea dance. Say hi to Marty for me. pic.twitter.com/5lmXqZGAw3

And it just wouldn’t be complete without a Dumb and Dumber tuxedo reference.

We’ll see how Wilson performs in his Denver debut. He better hope to pull out a win or he’ll likely see the trolls return for a second helping of postgame mockery.