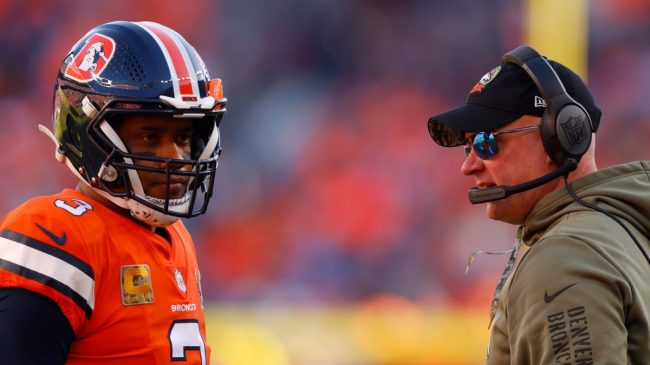 The Denver Broncos are all over the media on Wednesday after reports indicate that Russell Wilson is losing the locker room. On top of that, half of the team didn’t show up for his birthday party. Now, head coach Nathaniel Hackett addresses the rumors once and for all.

According to Troy Renck, the Broncos head coach calls the rumors about Russell Wilson “gossip.” The reports are/were believable though. Especially considering we watched Mike Purcell light up Wilson on the sideline mid-game. On top of that, Denver is playing well below expectations.

Regardless, Nathaniel Hackett is backing up his starting quarterback. Additionally, he doesn’t plan on making a switch either, so now we should expect to see Russell Wilson under center for the remainder of the season.

At the end of the day, it’s probably necessary for the Broncos’ head coach to squash the rumors. Although the team is well behind in the playoff race, Hackett is going to do everything possible to keep the chemistry strong. We’ll see how it goes though, as the offense hasn’t been great all year.

Even so, it’s not like Nathaniel Hackett would come out and just admit the rumors are true either. Head coaches of any sport typically try not to share every detail about their team. Especially when there are rumored issues within the locker room.

With that, there will likely be a watchful eye on the Broncos’ organization for the remainder of the season.