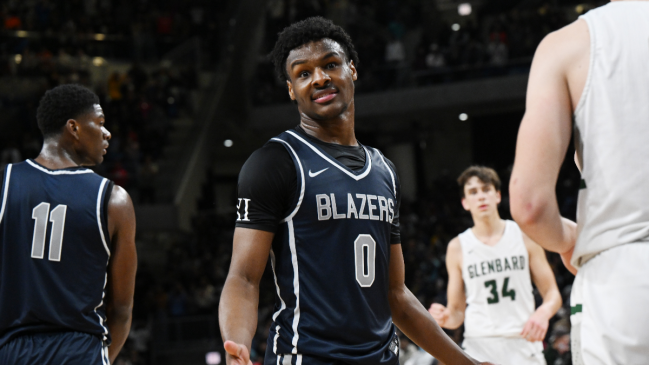 Even before he ever stepped foot on an NBA court, LeBron James was a prodigious basketball talent.

He starred at St. Vincent-St. Mary high school in Akron, Ohio and was tabbed as the No. 1 pick in the 2003 NBA Draft long before he ever even entered his name into the running.

James entered the NBA Draft directly out of high school, forgoing the chance to play college basketball, and the rest is history.

Now it appears that his son, Bronny, could take a similar path.

Bronny James is a four-star combo guard in the 2023 class according to 247Sports. He’s being recruit by a number of the top college basketball programs in the country, and reportedly recently narrow his search down to three schools: USC, Oregon and Ohio State.

But now it seems that there’s another option on the table. James could forgo the college route altogether, much like his father, and enter the pros immediate. Though it won’t be for the NBA, or for the NBA GLeague.

In a recent interview with The Herald Sun in Melbourne, Australian NBL commissioner Larry Kestelman revealed he’s attempted to recruit Bronny to join the league.

“We have absolutely reached out and there’s the start of a conversation but it’s very early days,” Kestelman told News Corp.

“It would be incredible to see, not just him, but I know there was a conversation about him and LeBron playing one season together.

“It’s a long shot, but the conversation has begun and we’ll be in the mix.”

The chances may well be slim. But it’s hard to fault Kestelman for trying. Landing James would be a massive coup for a league that has turned out talent such as Josh Giddey and Ousmane Dieng in recent year.

So who knows, maybe you get lucky?