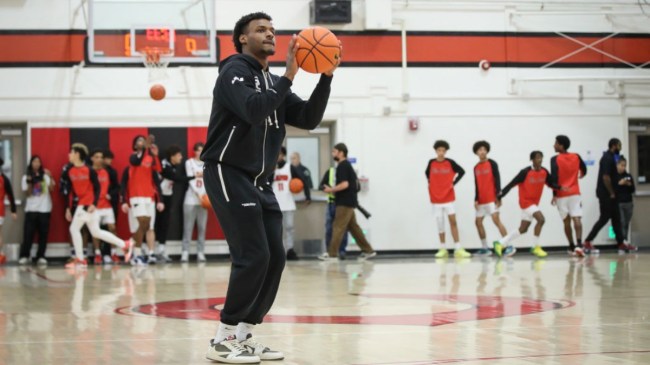 The wait continues for college basketball fans who want to know where Bronny James will be playing next season.

However, it looks like we could be getting close to a decision from the only uncommitted player in the Class of 2023’s top 50.

According to the LA Times’ Luca Evans, Bronny has narrowed his decision down to USC, Oregon, and Ohio State.

Bronny James will make his decision after Sierra Canyon’s season, and @bylucaevans reports his top three schools are Ohio State, Oregon and USC.

Could Bronny be a Trojan? https://t.co/IVuldJLOI5

Whichever school Bronny picks, he’ll be joining a top 10 recruiting class. However, which school he picks could be decided by the role he wants to play next season.

Only one of the schools is likely to have an opening at point guard next year.

USC’s backcourt is going to be particularly crowded. They could have Tre White and Reese Dixon-Waters returning from this year’s rotation and have already recruited Isaiah Collier for next season, who is a point guard and the top recruit in next year’s class. They also have a top 100 combo guard in their recruiting class.

Oregon already has Jackson Shelstad in their 2023 recruiting class, who is the 7th rated point guard in the class. That leaves an opening at shooting guard, which Bronny could fill.

Ohio State put together a strong class this year, but that class is mostly made up of strong front court players and most of their talent that could potentially return from this year’s team will be in the front court.

The only backcourt competition from this year’s class for Ohio State would be Taison Chatman, but he is a taller combo guard who could be moved to the 2 if Bronny is going to play point guard in college.

While we’re still waiting for clarity on Bronny James’ decision, there is already one thing that is very clear. Wherever Bronny goes he’s going to have a lot of talent around him.