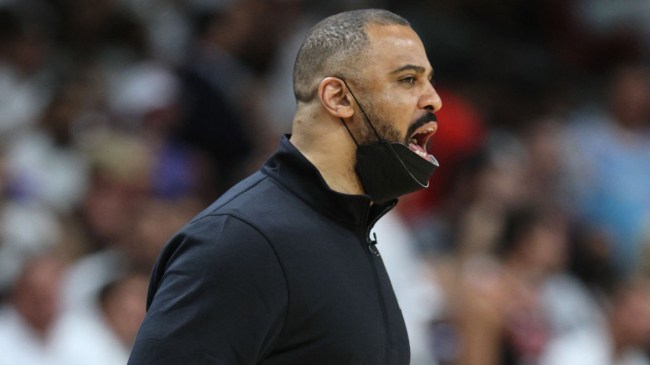 There may not be a franchise in all of sports right now that is more of a dumpster fire than the Brooklyn Nets. It’s already well known that Kevin Durant doesn’t want to be with the team. He’s averaging 32.6 points per game anyway and they still can’t win. They currently hold a 2-5 record. Then there’s everything going on with Kyrie Irving.

In the midst of all of these issues, the Nets have finally made a move that Durant wanted during the summer. They fired Steve Nash.

It seems that the Nets weren’t even waiting to fire Nash before they began doing their due diligence on a replacement. According to Sports Illustrated’s Chris Mannix, the Nets were already looking into Ime Udoka.

Brooklyn, among other teams, has quietly done due diligence on the circumstances of Ime Udoka's suspension in Boston, source told @SInow. With Udoka unlikely to ever return to the Celtics bench, teams have been looking into what happened.

Now it appears the Nets are already getting ready to bring in Udoka according to Shams Charania.

Ime Udoka has emerged as a strong frontrunner to be the next Brooklyn Nets head coach and the sides have begun discussions, sources tell @TheAthletic @Stadium. Nets are in the midst of their search process and are continuing to do due diligence.

It’s hard to see how bringing in a coach wrapped up in a scandal of his own is the solution for this team. They already have enough issues with Kyrie Irving right now.

Udoka also hasn’t really proven that he can handle the personalities in Brooklyn. What he did last season with the Celtics was impressive, but it was a very different situation from what he’ll have to deal with in Brooklyn.

The Nets don’t play any defense and their stars could ask to leave at any time. There’s not really any way to tell how he’s going to be able to handle the mess of a team he is about to take over.

One thing’s for sure. Things are never boring for the Brooklyn Nets.