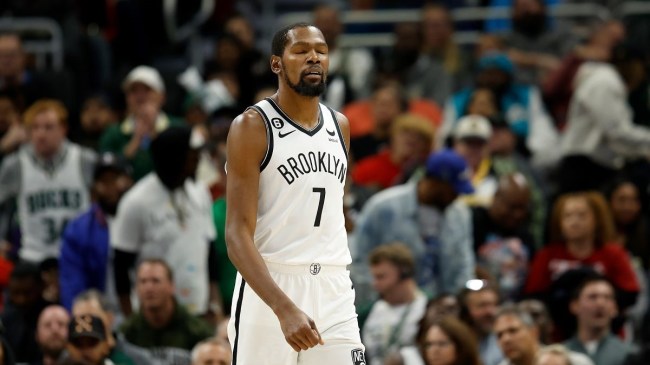 The Brooklyn Nets might just be in crisis mode. After a whirlwind offseason that saw their superstar players try to leave, then try to stage a coup before eventually returning, the Nets are off to a brutal 1-4 start.

Returning three-time NBA All-Star Ben Simmons still doesn’t know how to shoot and even looks afraid to shoot at times. Teammate Kyrie Irving called out Simmons before blaming the media for his struggles.

And that was all before the Nets’ latest loss to the Dallas Mavericks. Irving and superstar teammate Kevin Durant went off for a combined 76 points to help take the game to overtime, but ultimately the Mavs came out on top. Luka Doncic and company outscored the hosts 17-13 in the extra period to pull out a 129-125 victory.

The Nets’ loss was enough to set off at least one Brooklyn fan. With Brooklyn trailing 125-116 and Durant and the foul line late in OT, the fan launched a cup onto the Barclays Center courts.

The Mavericks-Nets game came to a pause after a fan tossed a cup onto the court 😳pic.twitter.com/VGsa1CM9cx

This is how malice in the palace started https://t.co/xacjMCIJ8p

Almost had another Malice at the Palace https://t.co/TyTtAlcIVQ

Malice in the Palace!!
Probably tried to throw some water on Luka cause he on 🔥🔥 https://t.co/fpg7gRGdnH

The Nets’ on-court issues have been building since well before the 2022 NBA season started. But it seems the organization as whole has reached an entirely new level of dysfunction.