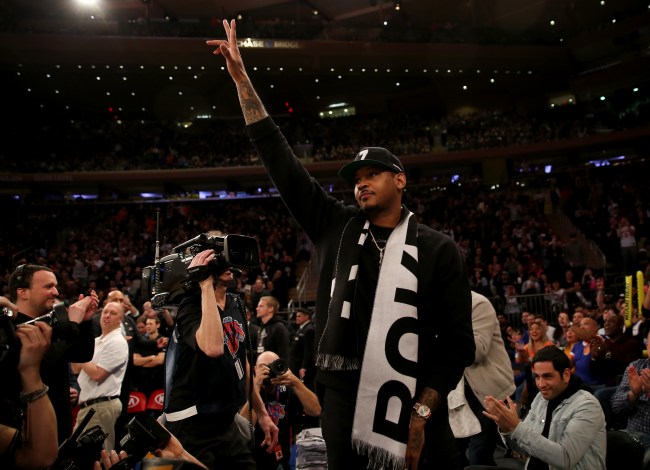 NBA teams are opening their training camps in a few weeks and there might be a chance that Carmelo Anthony is on a roster.

Last month, Melo made an emotional plea on ESPN’s First Take saying that he still wanted to play basketball.

"I felt like the game didn’t love me back at that point. … Now, I love the game too much to be away from it."

–Carmelo Anthony on his free agency

Melo went on to work out with several Nets players this offseason in L.A but the team was still not interested in signing him.

Pre Wilson Chandler suspension, #Nets shot down Melo interest after guys worked out with him in LA. post suspension, Nets did not refute Isola’s report of interest in Melo, and they are working out Joe Johnson. Seems clearly related to Chandler’s suspension status. (Contd)

According to a report from Ian Begley, Nets players are continuing to lobby the team to sigh Melo before the start of the season.

Unfortunately signing Melo could be tricky for the Nets but they do have options.

The Nets enter camp with 15 players on guaranteed contracts, which is the maximum regular-season allotment. But there is an avenue for the club to sign Anthony to a traditional NBA deal during the regular season.

Wilson Chandler is suspended for the first 25 games of the season for violating the league’s PED policy. After the fifth game of Chandler’s suspension, the Nets can move the veteran forward to the inactive list.

The Nets can also add Anthony on a training camp deal at any point in order for him to participate in camp and preseason games. Brooklyn has 17 players under contract at the moment.

Teams can have up to 20 players in training camp, so Anthony can be added on a training camp deal, waived prior to the regular season, and then re-signed when Chandler is moved to the inactive list.

Of course, this assumes that Nets GM Sean Marks is in favor of signing Anthony. The Nets’ interest in signing him is unknown, but the idea that several Nets players continue to strongly support the idea is noteworthy.

We’ll have to wait and see if Melo gets signed this season but as of now there doesn’t seem to be much interest from teams around the league.