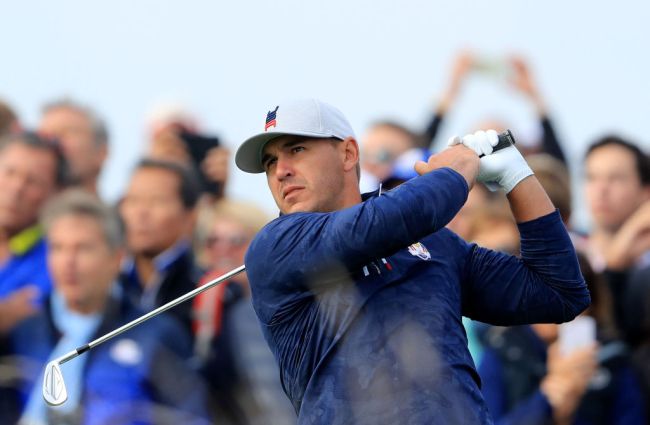 Brooks Koepka is set to make his third Ryder Cup appearance at Whistling Straits at the end of September. While it isn’t certain that he will compete after recently picking up a left wrist injury, based on his comments about the event, it sounds like he won’t be too disappointed if he isn’t able to tee it up.

Koepka is by no means the most talkative player in the game, but when he does talk, he’s honest. That’s something every sports fan can appreciate, but his honest comments about the Ryder Cup likely won’t sit too well with most American golf fans.

Koepka recently sat down with Matthew Rudy of Golf Digest for a lengthy sit-down and the four-time major winner didn’t hold anything back when discussing details about all that goes into the biennial event.

Routines Go Out The Window At The Ryder Cup

The 31-year-old is very much a routine guy. He’s got his tight-knit circle and goes about his business in his own way, as most players do, but that all gets tossed out the window during Ryder Cup week. The whole team aspect of the event, the meetings, the setup, and everything in between throws Koepka out of his rhythm, and he doesn’t necessarily appreciate that.

“It’s different. It’s hectic. It’s a bit odd, if I’m honest,” Koepka said when asked whether or not it’s weird being on a team. “I don’t want to say it’s a bad week. We’re just so individualized, and everybody has their routine and a different way of doing things, and now, it’s like, OK, we have to have a meeting at this time or go do this or go do that. It’s the opposite of what happens during a major week.”

“If I break down a major week, it’s so chill. You wouldn’t even believe me. I go to the course. I play nine holes. I go work out. Other than that, I’m sitting and watching TV, taking my mind off golf with relaxing stuff. The physical part, I can handle. The mental side, you have to be able to turn it off. Sometimes, the power comes from being able to turn it on. But for me, I get power from turning it off.”

Those comments are understandable, and again, you have to appreciate Koepka’s honesty. However, if you’re a Team USA supporter, these comments could certainly be an example of why the Americans have lost seven of the last nine Ryder Cups. Koepka doesn’t speak for every player that’s represented the United States, but he also can’t be the only one that shares these same thoughts, especially in today’s day and age.

He wasn’t finished there.

Koepka went into more detail about how his process and routine get thrown off during team events like the Ryder Cup and Presidents Cup.

“It’s tough. There are times where I’m like, I won my match. I did my job. What do you want from me,” Koepka asked. “I know how to take responsibility for the shots I hit every week. Now, somebody else hit a bad shot and left me in a bad spot, and I know this hole is a loss. That’s new, and you have to change the way you think about things. You go from an individual sport all the time to a team sport one week a year.”

“It’s so far from my normal routine. I can barely see my [personal] team. It’s hard to even go to the gym. At the Presidents Cup in New York, we had to go to the gym at 5 a.m. to get it in. We went to the Equinox, and it was me, Dustin and Tiger, and we come back and go to a team meeting. Under regular conditions, I take naps a lot. I might take an hour, hour-and-a-half nap, or just chill on the couch and watch “SportsCenter,” before rounds, after rounds, whatever. There’s no time to do that at the Ryder Cup. There’s no time to decompress.”

Koepka Won’t Lose Sleep If The U.S. Gets Embarrassed Again

The Ryder Cup sounds like a chore for Koepka. He sounds like someone who doesn’t want to represent the United States in one of the biggest events in the sport.

It doesn’t sound like he enjoys one second of the experience because it’s all so different from what he’s used to doing during a regular week, and that’s a shame.

This is an event that comes around every two years. This time around, the wait has been three years, but that doesn’t seem to have changed Koepka’s perspective on the Ryder Cup.

And yes, I know that the Ryder Cup is an exhibition, that it doesn’t really matter, but that excuse needs to be put to rest given that the Americans have won two Ryder Cups since 1995. Nobody on the European side would dare say anything remotely close to what Koepka did.

Koepka’s comments about not being able to take a nap during Ryder Cup week have to be the softest thing an athlete has said in my 28 years of life.

The Europeans hold the Ryder Cup in high regard, they enjoy owning bragging rights for two years, some even more so than the paychecks they earn out on Tour, but that isn’t the case for Koepka. Imagine Ian Poulter or Sergio Garcia even mentioning their lack of naps during Ryder Cup week.

Again, Koepka doesn’t speak for Team USA, but let’s not kid ourselves, this is the mindset the Americans have adopted over the years. They can’t flip that switch, come together, and compete, they’re too individualistic. That’s a true statement not only for American golfers but for the American people in general.

Koepka comes across, and presents himself, as a guy that doesn’t care about anything whatsoever that doesn’t directly affect him. So, he’s going to go about his business at the Ryder Cup and say ‘hey, I did my part’ and not lose another second of nap time if the Europeans embarrass the U.S. on home soil.