Brooks Koepka Rips The ‘Stuffiness’ In Golf, Explains Why He And Other Players Don’t ‘Have To Be Friends’ And Just How Much He Loves The Game 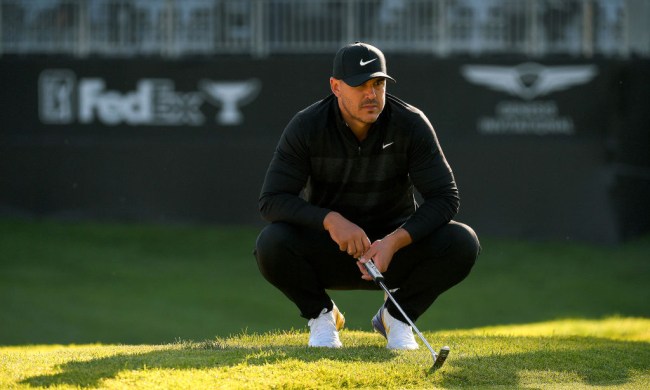 Other than Tiger Woods, Brooks Koepka is the most polarizing person in golf. The man is built like a tank, he’s an emotionless machine out on the course, by design, and his statue-like persona has helped him hoist four major championship trophies since 2017.

Despite the fact that he’s the No. 3 player in the world at the moment and has simply dominated major championships over the past three years, the fact that he’s different and doesn’t really have an ounce of ‘typical golfer’ in him has left a lot of golf fans out there on the fence of really rooting for the guy every time he tees it up. That’s especially the case if the guy he’s batting with is one of the most liked players on Tour.

In an in-depth interview with GQ, Koepka opened up about a lot of things involving topics both on and off the course.

As we’ve pointed out, Koepka goes to the beat of his own drum and that includes who he hangs out with off the course. While some players’ best buddies are fellow pros and they hang out with each other off the course, Koepka explained that he already has his group of friends.

“This might come across the wrong way,” he said of his relationship with other players on tour, “but I already have enough friends. I don’t need any more. Just ’cause we work together doesn’t mean we have to be friends. I’ve got enough friends.

“I just don’t want to be that close with everybody I compete with,” Koepka said. “Like, I don’t even have Rory’s phone number. I didn’t have Tiger’s phone number for the longest time. Like, I just never saved it.…”

There is one thing that Koepka has in common with plenty of golfers out there and that is that he does have his own gripes with the game. He explained that he doesn’t like the stuffiness that goes with golf, particularly at high-end country clubs.

“One thing I’d change is maybe the stuffiness. Golf has always had this persona of the triple-pleated khaki pants, the button-up shirt, very country club atmosphere, where it doesn’t always have to be that way. That’s part of the problem. Everybody always says, ‘You need to grow the game.’ Well, why do you need to be so buttoned-up? ‘You have to take your hat off when you get in here.’ ‘You’re not allowed in here unless you’re a member—or unless the member’s here.’ Really? I just never really liked the country club atmosphere. I know that drives a lot of people away from liking me.

But just ’cause this golf club has such prestige and the members are all famous and have a lot of money…like, why can’t I show up and just go play the golf course? Why do I have to sit in my car and wait for the member?”

Koepka went on to explain that maybe that’s why people don’t look at him as a guy that loves the game. On top of not liking the stuffiness, this is also a guy that said he gets bored during tournaments sometimes, so some hardcore golf traditionalists may draw that conclusion pretty quickly, but it’s clearly not the case.

“I just think people confuse all this for me not loving the game. I love the game. I absolutely love the game. I don’t love the stuffy atmosphere that comes along with it. That, to me, isn’t enjoyable. When I practice, I don’t think I’ve ever tucked my shirt in. I show up to the golf course, half the time my tennis shoes are untied, I’m chippin’, puttin’, shirt’s untucked, I’ve got my hat on, and I’m not wearing a belt, because who wears a belt when it’s untucked? But a lot of clubs, if I walked up like that, it’d be: ‘Sir, you need to tuck your shirt in. You need to take your hat off when you get in here.’ ”

They would still say it to even you?

“Oh yeah. For sure. I’ve been told that. That’s just not my style of place.”

“I love it,” he went on, “but I know how to break away from it. That’s where the confusion lies. Or maybe the misconception of lies. I absolutely love the game. If I didn’t love it, I’d retire right now.”

Whether you’re a fan of Koepka, don’t like the guy or think he’s refreshing for the game or simply comes across as some sort of a try-hard, none of that really matters because it’s clear he doesn’t care about that outside noise.

His gameplan is working at the moment and while he’s battled with the injury bug recently, Koepka isn’t going anywhere anytime soon.