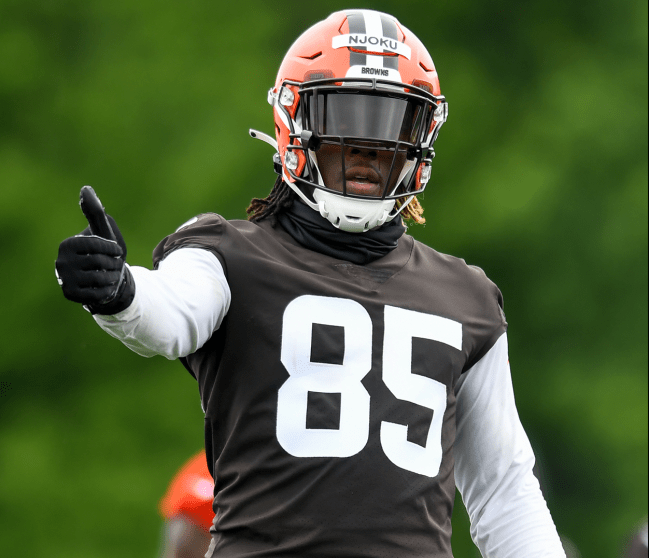 David Njoku is out to prove the haters wrong. The Cleveland Browns tight end got paid a small fortune after signing a contract extension with the team during the offseason and NFL fans were not sure why.

Njoku is going to show them.

The University of Miami product, who was drafted in the first round of the 2017 NFL Draft, has not exploded statistically through his first five seasons in the league. He has never recorded more than 639 yards (2018) or four touchdowns (2017, 2018, 2021) in a single season and his career-high in single-season receptions sits at 56.

That doesn’t mean that he isn’t a freak.

Sergio Malmborg, Njoku’s personal trainer, recently posted two videos of his client’s workouts and they are both insane for different reasons. One shows his raw strength while the other showcases his incredible balance.

In the first video, the Cleveland tight end makes 120-pound dumbbell carries look easy. With 240 pounds of additional weight in his hands, Njoku glides across the floor as if he is out for a casual evening stroll. Light work.

David Njoku is a monster 💪😤 pic.twitter.com/Pf9D1vOTrL

The second video of Njoku’s balance workout is truly absurd.

He is standing on one foot on top of a balance trainer. But that’s not all!

Bands that provide resistance as he moves his arms are holding both of Njoku’s wrists. But that’s not all!

As if that wasn’t difficult enough, Njoku is tasked with trying to catch tennis balls that are randomly thrown directly at him. And he does it fairly efortlessly.

The balance. The concentration.

As Njoku looks to ball out on his new contract, he is in fantastic shape.