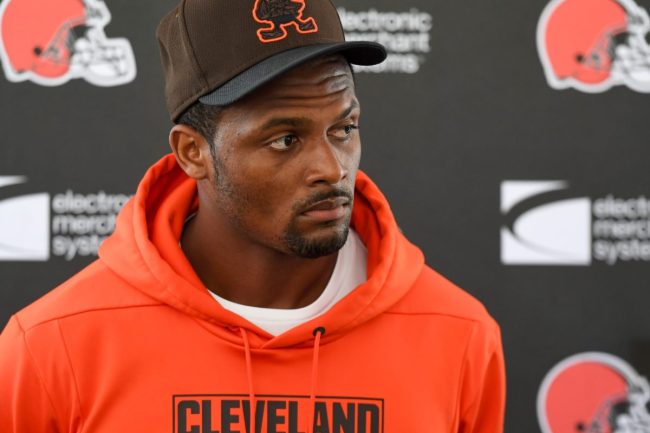 The Deshaun Watson saga is over, at least in terms of his NFL punishment for the 2022 season.

The star passer will be suspended for 11 games in the upcoming year while also landing a $5 million fine. He won’t make his debut for the Browns until Week 13 of the regular season, which fittingly comes in Houston against his former team.

Watson was accused by more than 20 women of sexual misconduct during massage sessions, something the Browns knew about prior to trading for the signal caller. Despite the accusations, Cleveland signed Watson to a $230 million deal, fully guaranteed.

The quarterback has maintained his innocence, still saying that he believes that he did no wrong.

But some recent comments from Browns’ management seem to confirm that they knew Watson’s behavior was shady when making the offseason trade, and they didn’t care.

Cleveland made a massage plan for Watson when making the trade

Browns GM Andrew Berry said in a press conference Thursday that the team started putting together their own massage plan for Watson as soon as they made the trade, something that seems unnecessary for someone adamant that they’d done no wrong.

All that guaranteed money to a player who the team can’t trust to get a massage. It’s all so gross. https://t.co/FfLHo3XM5H

The team is apparently not comfortable with the quarterback seeking this out his own help, and who would blame them? $230 million is a lot of money.

Fans were quick to key in on that interesting comment.

Signed him and immediately start planning how to keep him from committing more sexual assault while in Cleveland. I guess it is just a BUISNESS. Sad 😔

Isn’t this the Browns admitting Watson preys on massage therapists? If Watson is as innocent as he claims, he should have no problem hiring his own. Will they have a team approved electrician work on Watson’s house too, or is this specific to occupations he sexually harasses?

But that wasn’t the only eyebrow raiser from the press conference. While Watson continues to stand on his innocence, the Browns’ management team is singing a different tune.

Watson has remained adamant on his innocence in the sexual misconduct lawsuits, but it seems that ownership and management don’t quite believe it.

Roger Goodell: “Deshaun has committed to doing the hard work on himself.”

Deshaun Watson: “I’ve always been able to stand on my innocence and always said I never assaulted or disrespected anyone.”

Haslam’s wife, Dee, even chimed in, giving an odd view on the situation.

“Counseling takes time. You don’t just go to a counseling session and wake up and understand the impact it has. I think it’s a layering effect and it takes weeks, months, a long time to get to where you understand so much more about yourself. I think Deshaun has made progress from the time he came here… but it’s not going to happen overnight.”

When asked about Watson standing firm on his claims, and whether or not she believes that he is innocent, Dee Haslam said the following.

“I think, again, we respect his opinion. I do think in counseling, Deshaun will grow to learn a lot more about himself… He’s committed to doing the work to make himself a better person.”

Certainly not the answer one would give if they truly believed that there was no wrongdoing. She also says that her family will be donating $1 million to the programs dedicated to teaching about sex trafficking, sexual abuse, and other related endeavors, which is incredible. But it pales in comparison to the $230 million they will be paying their new quarterback, whose actions have created this situation.

The whole Watson debacle has been a black eye for the NFL and the Browns. It seems that this was strictly a business decision on Cleveland’s end, and they didn’t really care about much else.