Reports Say Deshaun Watson’s Suspension Will Be 11 Games, Meaning He Will Return In Week 13 Against Houston 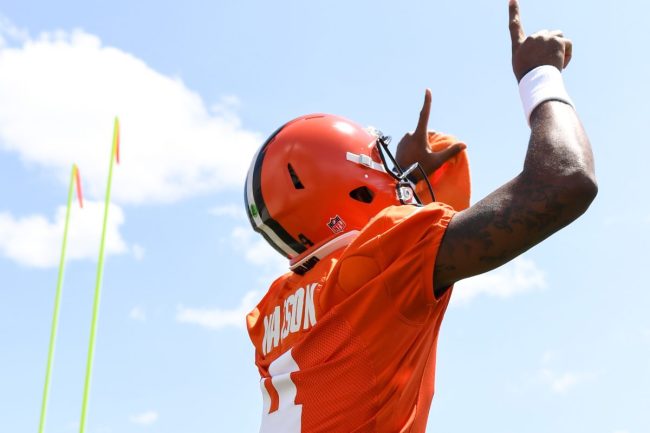 A ruling has reportedly been made on the Deshaun Watson suspension. The offseason drama has unfolded following his 20+ sexual misconduct lawsuits dating back to his time in Houston.

It began with Watson sitting out the 2021 season with the Texans before being traded to the Browns this summer. Cleveland knew that there was a possibility of their new passer being suspended, but still opted to give him a guaranteed $230 million deal.

Now, we know how long the team will be without its leader under center.

After an initial hearing in front of Judge Sue Robinson, it was deemed that the quarterback would miss his first six games in Cleveland. The NFL, unhappy with the outcome, appealed that ruling in an attempt to make a statement on sexual misconduct throughout the league.

Commissioner Roger Goodell pushed for an indefinite suspension, which would’ve likely caused Watson to miss the entire 2022 season. Now, it appears that the NFL and NFLPA have come to an agreement.

The two sides will reportedly meet in the middle, settling on an 11-game suspension for Watson. The league also pushed for a hefty $5 million fine after the Browns attempted to minimize financial damage with the structure of their QB’s contract.

Both the Browns and Deshaun Watson released statements on the suspension on social media.

While the suspension concludes what’s been a long, drawn-out process in Cleveland, there’s an interesting storyline coming from the final ruling.

Deshaun Watson will return from suspension to face Houston

Watson will return to the field in Week 13, with his suspension ending after the Browns’ first 11 games. Watson will make his Cleveland debut against none other than his former team in Houston with the Browns traveling to take on the Texans. That was something the NFL was hoping to avoid, but they were unsuccessful in doing so.

Many have been quick to note the opponent for that scheduled return.

Browns’ QB Deshaun Watson’s first game back is now scheduled to be in week 13 at Houston against the Texans.

#Browns QB Deshaun Watson will make his debut against the Houston Texans.

Deshaun Watson's first game as the #Browns QB will take place in….

Houston, TX vs the #Texans.🍿

Browns QB Deshaun Watson’s 11-game, $5 million penalty (plus counseling), was a result of a settlement talks between the league and union and is final. NFL was insistent on a fine and treatment, they get it here.

That will make for quite the “reunion” in Houston, and it will certainly be the storyline of the Week 13 slate of games.