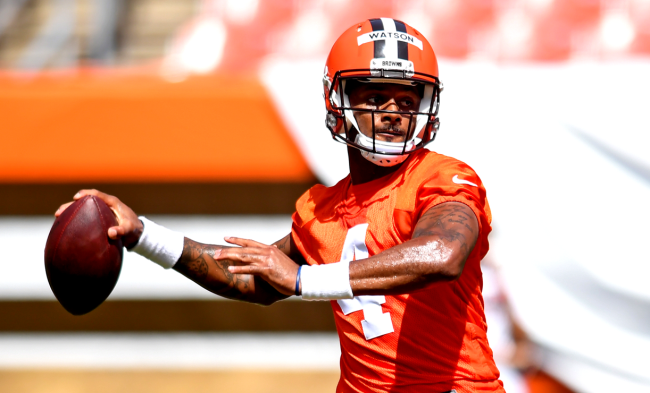 As expected, the NFL announced on Wednesday that it would appeal the six game suspension given to Cleveland Browns quarterback Deshaun Watson.

Despite the NFLPA asking the league to not appeal the ruling, the NFL has decided that it is not satisifed with former federal judge Sue L. Robinson giving Watson just a six-game suspension.

Multiple sources claimed on Wednesday that one of the reasons why the NFL is pushing for a longer suspension has to do with the Cleveland Browns’ schedule.

The NFL is reportedly pushing for a suspension of at least 12 games and the reason for that is that the league doesn’t want to see Watson play in Week 13 in the Browns game versus the Houston Texans. The Browns’ bye week takes place in Week 9.

This is correct from @AlbertBreer. I have also heard from sources that the #NFL and Roger Goodell specifically doesn’t want Watson playing in the Houston game in week 12. Which lines up with the league previously circling a 12 game suspension in (very limited) settlement talks. https://t.co/4AmPMemC9M

The appeal of Judge Robinson’s decision, based on the collective bargaining agreement, now goes to … wait for it … the NFL commissioner’s office.

That’s right. Should he so choose, Roger Goodell could be the one, and only one, to decide Watson’s fate.

Goodell also has the option to designate someone who’s not with the league office to handle the appeal – a move he will reportedly make in this case.

Per source, Roger Goodell will not personally handle the Deshaun Watson appeal. He will designate someone not with the league office to handle it.

According to the NFL’s Personal Conduct Policy, “Such appeals will be: (i) processed on an expedited basis; (ii) limited to consideration of the terms of discipline imposed; and (iii) based upon a review of the existing record without reference to evidence or testimony not previously considered. No additional evidence or testimony shall be presented to or accepted by the Commissioner or his designee. Any factual findings and evidentiary determinations of the Disciplinary Officer will be binding to the parties on appeal, and the decision of the Commissioner or his designee, which may overturn, reduce, modify or increase the discipline previously issued, will be final and binding on all parties.”

There will be no new hearing in the case as there is no new evidence being presented. However, according to ProFootballTalk.com, since Judge Robinson “found that Watson violated three different provisions of the policy as to four different people … nothing about her decision to suspend Watson six games limits the ability of Goodell or his designee to implement a much longer suspension.”

The league has reportedly been said to be pursuing an “indefinite suspension” plus a monetary fine.

No timetable has been determined yet as to when a final decision will be made in Watson’s case, or who will be making it.