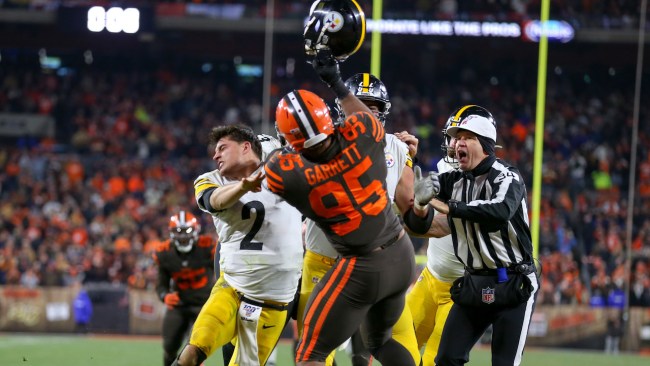 Well folks, the year that is 2020 just keeps outdoing itself. We have yet another example of the world being off its axis with the latest news out of Cleveland. Just 13 months after Myles Garrett ripped off Mason Rudolph’s helmet and hit him across the head with it, the Browns have nominated him for the Walter Payton Man Of The Year Award.

Garrett, who was suspended for the rest of the season following the attack, alleged that Rudolph called him a racial slur which escalated the situation.

The Man Of The Year Award recognizes an NFL player for his excellence on and off the field representing the best of the NFL’s commitment to philanthropy and community impact, per the NFL’s website.

Garrett has not ripped off a player’s helmet and hit him over the head with it this season, so he has that going for him. The defensive end does do quite a bit of charity work both locally and is a captain of the NFL Waterboy Program which brings clean water to East African communities, nevertheless, Twitter immediately went to work in reminding the Browns that he essentially assaulted a man on a football field a year ago.

How it started How it’s going pic.twitter.com/Cwr0xtiUBc

Come on people, cut him some slack. Give credit where credit is due. He hasn't assaulted anyone on the field in almost a year.