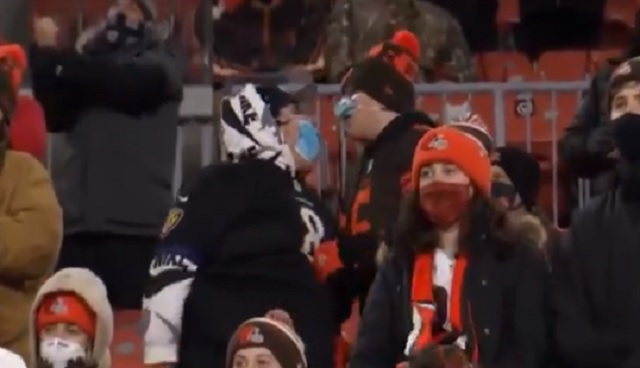 The Cleveland Browns hosted the Baltimore Ravens on Monday Night and despite only a limited amount of people being allowed into the stadium fans still found a way to get in each other’s faces during the game.

In the second quarter of the game, ESPN’s cameras caught a pair of fans getting heated and yelling at each other in the stands.

Fans watching at home noticed the interaction and wondered why the fans were allowed to be so close to each other.

Okay but why is he wearing his mask like that https://t.co/0eAk4f3iHr

Buddy has his mask up & everything…. #MNF https://t.co/pMferNntvO

Imagine getting covid spewed in your face by a dude telling you your team sucks when he's never seen the playoffs in his life https://t.co/Ggp7IeHrJt

**Socially distant** am I right @GovMikeDeWine ??? Please limit your Christmas gatherings to immediate family but 20K in a football stadium is fine!! 💰💰💰 https://t.co/MZVVhsni3J

Dude took put the mask over your nose to a new level, amazing stuff https://t.co/B7jG9OvGNV