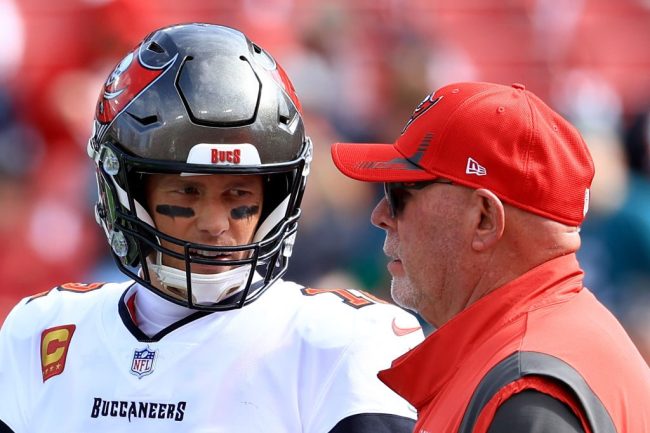 As the football world prepared itself for the Divisional Round of the NFL playoffs, talk has turned to Tom Brady’s future. It started with Brady’s former teammate, Rob Ninkovich, saying he wouldn’t be surprised if Brady retired.

Then an analyst from Fox Sports 1 said he believes that Brady could retire if the Bucs lose tomorrow. Today, a reports surfaced that his teammates are preparing for him to retire.

It would appear his teammates and his head coach aren’t on the same page on this one. Bruce Arians told the “Tampa Bay Times” that he would be “shocked” to see Tom Brady retire.

“The way he was at practice (Friday), I would be shocked if he didn’t (play next year). You know they have that Friday quarterback challenge, and he came flying out of the locker room, sprinting two or three fields away and couldn’t wait to get into the challenge. He was like a little kid. I would be shocked.”

If Tom Brady really is still enjoying himself that much, it’s hard to believe that he’d be ready to hang it up after this season. It definitely does seem like Brady is having a good time playing football. He has “Man in the Arena” now. He’s making podcast appearances. He’s talking trash to defenses.

He looks like he’s still having fun. He also to have just had one of the best seasons of his career. Tom Brady always said he’d stop playing “when he sucks”. That’s absolutely not the case right now.

Personally, I hope we get to see the greatest quarterback in NFL history try to shred the league for another year.