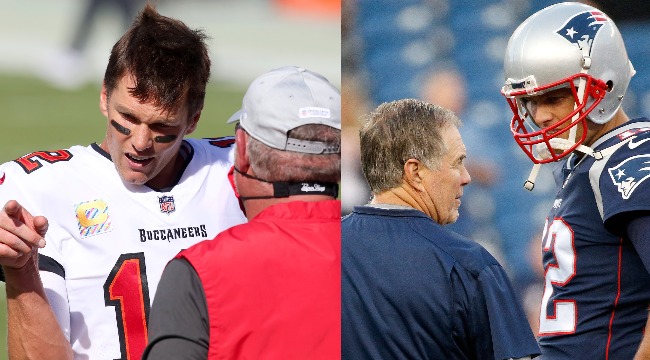 I’d imagine Bill Belichick—a man who recently missed the playoffs for the first time in 12 years—is spending the offseason sitting in a dark room, stone-faced, stroking a cat and watching Johns Hopkins lacrosse highlights in an effort to find his next slot receiver.

Meanwhile, a Brady-led Bucs team is heading to the NFC Championship for the first time in 18 years, and Bruce Arians is more than happy being the bridesmaid rather than the bride. He wants the public to know he’s not a regular coach, he’s a cool coach.

“Consummate leader,” Arians told NBC’s Peter King. “Has been all year. Got the air of confidence that permeates through our team every day.

Whether intentional or not, Arians picked at a scab that’s permeated New England since Brady’s departure. It’s widely believed that Brady wanted more input in the offense and his deteriorating relationship with offensive coordinator Josh McDaniels catalyzed his exit from the only team he’s ever known.

Former Patriots tight end Christian Fauria re-emphasized this belief and claimed that “Arians is just repeating and paraphrasing” the law Brady laid down when he arrived in Tampa.

“Brady is venting and explaining the situation either before he signed, during the season,” said Christian Fauria on OMF Monday. “‘Wow, this is so different. You let me do what I need to do.’ So Arians is just repeating it and paraphrasing it in his own words. … All that is missing is, ‘Yeah, Brady told me. We have had lots of talks. I let him coach. I let him be who he is. I let him spread his wings and fly.’”

“The Sound of Silence” plays in the background of The Sith Lord’s film room while he ignores yet another call from Cam Newton. He leans over and whispers softly into his cat’s ear: “Get me Brian Hoyer.”