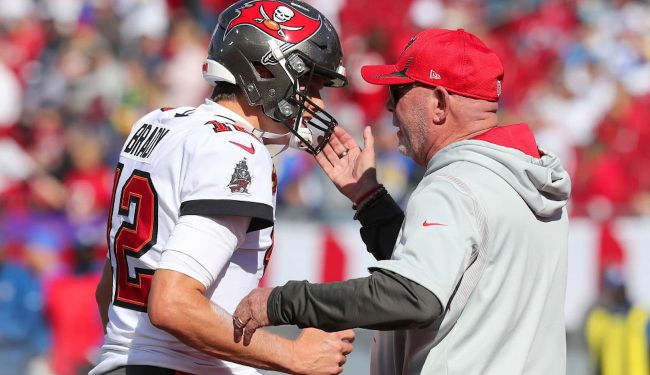 We’ve written quite a few articles about the relationship between Tom Brady and Bruce Arians, and if there’s one thing I’ve learned in my time writing about things on the internet, it’s that where there’s smoke, there’s usually fire.

It certainly doesn’t help that Arians seems far too willing to comment on the matter and gives off “trying way too hard to sell a lie” energy every single time. Like if the guy on the Titanic who told the captain to speed up said “Who ME?! Asking the boat to speed up?! Why would I POSSIBLY do such a thing?!” before leaping off the side of the ship.

Arians, who’s now serving as a senior consultant for the Bucs, recently made more slightly bizarre comments about his relationship with Brady by pointing out that TB12 bought him a $50K watch as a sign of their bond.

Speaking at the Arians Family Foundation gala, Arians addressed his relationship with Brady by pointing out that Brady will be giving Arians an expensive piece of jewelry.

No one ever said they hate each other. The question is whether Brady could continue to work with Arians. As we’ve said time and again, it’s possible for people to have a good personal relationship while also being unable to coexist professionally.

“It’s never going to go away, no matter what anyone says,” Arians said. “It’s a national narrative that they think they know, but they don’t.” [via ProFootballTalk]