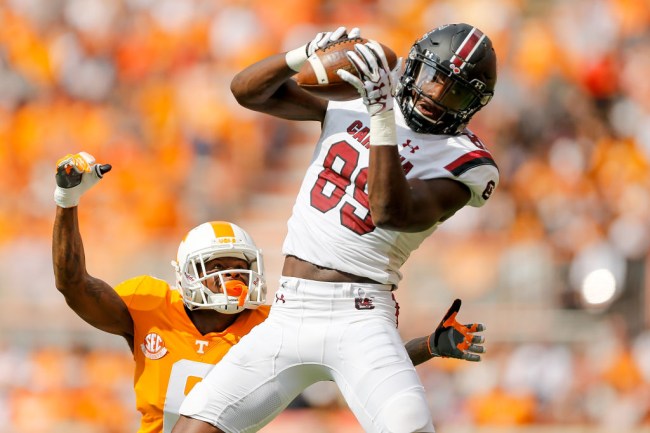 Pretty much every week there is one of those ‘catch of the year’ type snags in college football that everyone freaks out about and overreacts to, but the catch Bryan Edwards hauled in for South Carolina against Tennessee truly may be the catch of the year.

Nothing really comes close to Odell Beckham Jr.’s famous one-handed catch against the Cowboys back in 2015, but Edwards is pretty damn similar. The one-handed snag came late in the second quarter just before halftime.

Like I said, it’s incredibly similar to the OBJ grab. Edwards attacks the ball a little late and his arm stretches behind his back just like OBJ’s did. The throw was even to the same pylon as the OBJ catch, but the big difference here is that after review Edwards was ruled out at the one as his other hand landed out of bounds before he fell on the pylon.

It’s just an absolutely ridiculous play that you’ll see over and over again on SportsCenter. Did we mention that it was Edwards’ 208th career catch for the Gamecocks which broke the previous school record? Talk about setting a record in style.

Shoutout to the announcer absolutely losing his mind on the call; we all lost our minds watching it, he just happened to have a mic in front of his face.

South Carolina was able to punch it into the endzone soon after the catch to take a 21-17 lead into the break.