Bryce Harper Tells Heckler To ‘Shut The F*ck Up’, Subsequently Smashes A Walk-Off Grand Slam To The Moon 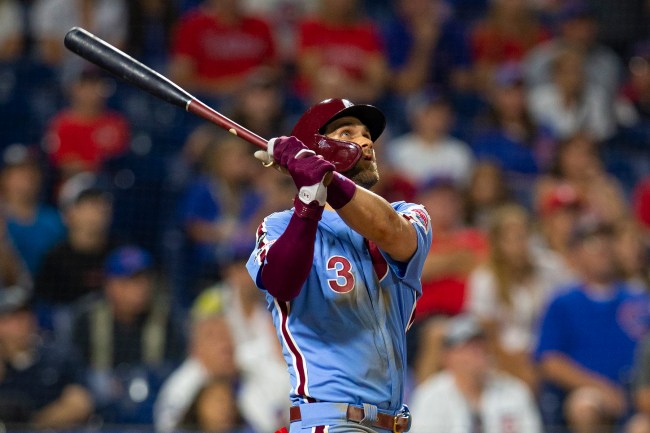 Look, say what you will about his absolutely mammoth contract, there’s simply no denying that Bryce Harper is baseball’s biggest star, and deservedly so.

While he may not be the game’s best player, he’s certainly Major League Baseball’s most bankable star, as the man truly is a box office rock star who exudes BDE. I mean, shit, I’m a New York Mets fan and the highlight of Harper’s moon shot got me hyped up AF. The better Bryce Harper is, the better baseball is — it’s really just that simple.

So, when Bryce Harper crushes a 9th inning walk-off grand slam to beat the Chicago Cubs, it becomes the story of the sports world. But, because Bryce Harper is Bryce Harper, that’s not the only story to come out of the epic moment.

Prior to singlehandedly winning the game for the Philadelphia Phillies, Harper was being heckled by a fan in the crowd, who was quick to point out that Harper — the $330 million man — was 0-for-3 on the night.

Harper’s response? A simple yet highly effective “shut the fuck up.”

Harper would certainly shut the guy up alright — well, actually, if the dude was a Phillies fan, he may have done the exact opposite of shutting the fuck up after Harper raked a homer into the night sky — as he would later go on to win the game for the Phils with an epic grand slam.

Let me tell ya, baseball, man — when it stinks, it fucking suckkkkksssss. But, but… when it’s great, it is downright electric.