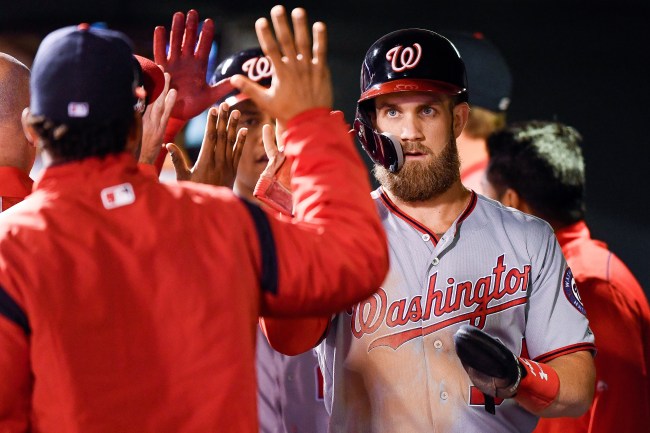 Bryce Harper is the big fish who everyone’s waiting to hook during this major league baseball offseason, with teams with the money looking to open up the checkbook and toss hundreds of millions of dollars at the Washington Nationals slugger. During the annual Winter Meetings a few weeks ago, there were rumors that Harper may join the New York Yankees, Los Angeles Dodgers and some other darkhorse teams, but the former NL MVP has talked about how cool it would be to play for the Yanks one day.

While that may not happen because of financial reasons, there’s still optimism and hope amongst Yankees fans that Bryce Harper will, somehow, someway end up in pinstripes. And, thanks to Pittsburgh Pirates pitcher Trevor Williams, he made one Yankees fan who lives in the Bronx a believer the other day, when the pitcher jokingly pulled a fast one on the poor fan by claiming to be Bryce Harper.

Williams, who looks a helluva lot like Bryce Harper, saw the opportunity to have some fun with his waiter — who thought it was the slugger — and just couldn’t resist the urge. Here’s what he tweeted out the other day after the little prank.

Our waiter tonight thought I was Bryce Harper so of course I played along and told him I was signing with the Yankees. He was very happy because he was from the Bronx.

You’ve got to love this if you’re Trevor Williams, because, when you look like a guy who everyone in the baseball world’s waiting to sign the biggest contract in sports history, why the hell not have some fun if you look like that dude, right? Bryce Harper probably finds some humor in this, too.

Don’t get me wrong, I feel for the poor Yankees fan, Williams’ waiter, but I really want to know why the pitcher didn’t record the guy’s reaction and put that on social media. How classic would it have been had the Internet witnessed this prank in all its glory?

I also want to know what the hell the waiter did after hearing the fake Bryce Harper news. Like, did he text buddies? Did he try to break the news on his own social media? Did he take a pic with fake Bryce AKA Trevor Williams and think it was the Nationals star? What happened when the guy found out it wasn’t Bryce Harper, or didn’t he? So. Many. Questions.

C’mon, Trevor, give us more details, because I need to know.