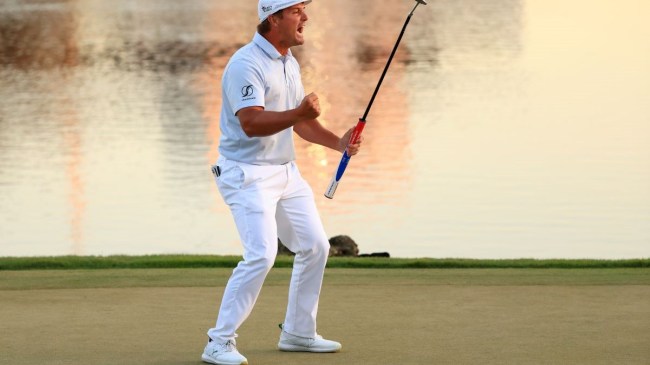 There are few if any more polarizing figures in golf than Bryson DeChambeau. DeChambeau, billed as part golfer, part mad scientist out of college at SMU, has always managed to rub golf fans the wrong way.

The Texas native does things his own way. All of his clubs are the same length. He talks about things such as “true hole locations” and “spin rates.” But despite a ton of early success on the PGA Tour, including big wins at The Memorial Tournament and the Dell Technologies Championship, DeChambeau decided it was time to make a different approach.

He changed his diet and put on 50 pounds between the end of the 2019 and the beginning of 2020 seasons. This allowed DeChambeau to become one of the biggest hitters on tour. He regularly pounded drives beyond 350 yards, leaving him just short wedges into the hole.

But fans and fellow golfers wondered how he did it. With some even making allegations of steroid use. Now DeChambeau is opening up and telling the world about his method and why he now regrets it.

In order to gain such a massive amount of weight in such a short time, DeChambeau needed to significantly increase both his calorie and protein intake. But it turns out that maybe he should’ve taken some time away from physics to study biochemistry.

Golf.com writer Dylan Dethier spoke with DeChambeau recently and uncovered everything that he was eating during his insane weight gain.

Here's Bryson's 2020 diet. He now regrets it — says it made him "feel weird." Trying to figure out why

For those counting, that is EIGHT protein shakes a day plus a steak, eggs, peanut butter and jelly sandwich and bacon. I’m no expert, but it’s hard to imagine DeChambeau was processing all that protein each day. It’s hard to imagine why DeChambeau told Dethier that the diet made him “feel weird.”

“I ate improperly for almost a year and a half and I was starting to feel weird,” DeChambeau said recently on the 5 Clubs podcast. “My gut was all messed up, and so I went completely healthy, went on a Whole 30 diet, got a nutritionist, did blood work, measured stuff in my gut biome. I was super-inflamed.”

He then warmed any young athletes looking to bulk up not to do it the way he did.

“I mean, get stronger in a healthy way. Go get a blood sensitivity test and figure out what works best for your body to gain size and strength,” DeChambeau said.

As it turns out, just packing yourself full of enough protein to hibernate through the winter months isn’t the best idea.