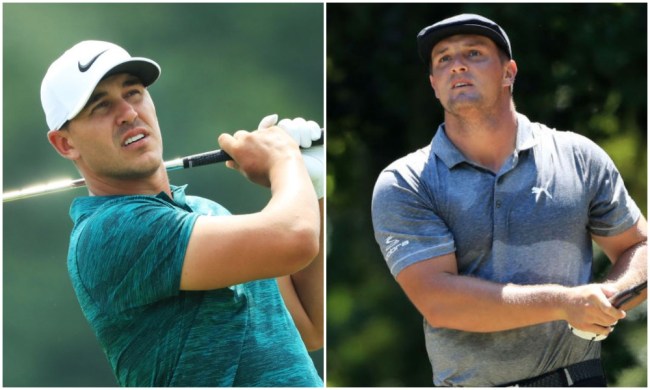 We’ve got beef in these Golf Twitter streets, folks.

In case you’ve been *actually* living under a rock, Bryson DeChambeau has put on some serious, serious mass over the past 18 months or so, including about 20 pounds during the PGA Tour’s three-month pause.

DeChambeau was in search of more swing and ball speed to pick up distance off the tee and he’s accomplished it as he’s leading the PGA Tour in average driving distance. He also won last week’s Rocket Mortgage Classic, so it’s safe to say that DeChambeau’s experiment has worked out extremely well thus far.

Having said that, some people out there think DeChambeau may have achieved his bulk up illegally. People are implying that he used steroids instead of putting on mass by both eating and lifting everything in sight.

Well, Brooks Koepka decided to take a jab at DeChambeau and the steroid allegations on Twitter on Tuesday afternoon by tweeting out a clip from ‘Eastbound & Down.’

It honestly doesn’t get more clear cut than that. There’s literally no chance Koepka is talking about anyone or anything else than DeChambeau and the steroid rumors out there.

These two have a storied history, too, which makes this situation even that much more entertaining.

It all started at the 2019 Northern Trust Open when DeChambeau took over two minutes to hit an 8-foot putt. Koepka is practically the lead spokesperson on Tour when it comes to slow play; he absolutely hates it. It was later reported that DeChambeau approached Koepka’s caddie at the tournament saying that if Koepka has a problem with his slow play, he should talk to him about it face-to-face.

Then, in January, DeChambeau took a shot at Koepka’s physique and practically bragged about the fact that he weighs more than him and, unlike Koepka, has abs. Koepka then got the best of DeChambeau torching him on Twitter by showing off his major championship trophies.

You were right @b_dechambeau I am 2 short of a 6 pack! pic.twitter.com/aCJ1jimId6

This feud between two of the top players in the world – Koepka is currently ranked sixth while DeChambeau is ranked seventh – is about as good as it gets when it comes to golf drama. Here’s to hoping that this is just the start of this highly entertaining beef.

These two are so, so great for the game of golf.