Bryson DeChambeau: “Was Never On The Clock Last Week, Y’all Can Say Whatever You Want, But We’re Having A F*cking Awesome Time” 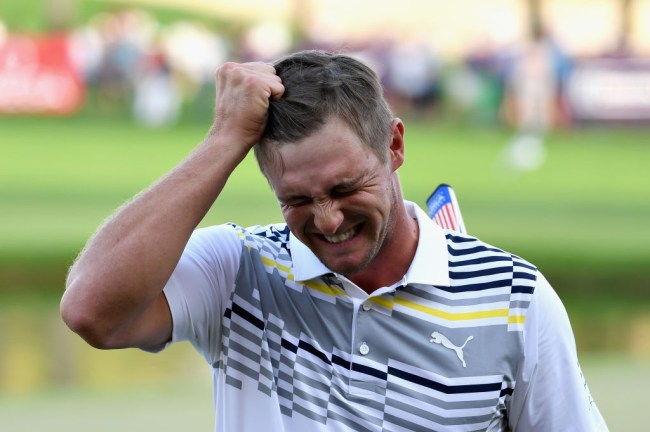 Bryson DeChambeau has been catching some serious heat after last week’s drama at The Northern Trust Open.

It all started when a video showing DeChambeau taking well over two minutes over an 8-foot putt surfaced. Justin Thomas was his playing partner that day and even he was sick of it as he looked at his imaginary watch while suffering through it.

After all of this went down, DeChambeau reportedly approached Brooks Koepka’s caddie and told him that Koepka “should direct any comments about slow play to my face.” Koepka has been the lead spokesperson all season on the slow play issues on Tour. DeChambeau got what he wished for, too, as Koepka did talk to DeChambea on the range and things “went fine.”

Things may have gone fine, but it is worth noting that DeChambeau came out after the third-round and said “I hate playing golf, I absolutely hate it.” Those are interesting words from the No. 8 player in the world that’s made over $13.5 million in his career.

This all struck a fire in the golf media world and the PGA Tour even responded to it all by releasing a statement saying it is reviewing the pace of play policy.

The drama in the golf streets was as high as it’s been in quite some time. Not NBA Twitter levels, not really close, but stuff was moving.

Fast-forward to this week’s BMW Championship and it doesn’t seem like DeChambeau gives a damn about the haters out there. He said as much during a video he took during Wednesday’s pro-am.

You have to love the half-smile just before he says “last week we played under time and this week we’ll do the same thing.” He knows what he’s doing, he knows exactly what he’s doing.