Bryson DeChambeau Talks Bad About Brooks Koepka’s Physique, Brags About The Fact He Has Abs During Twitch Stream 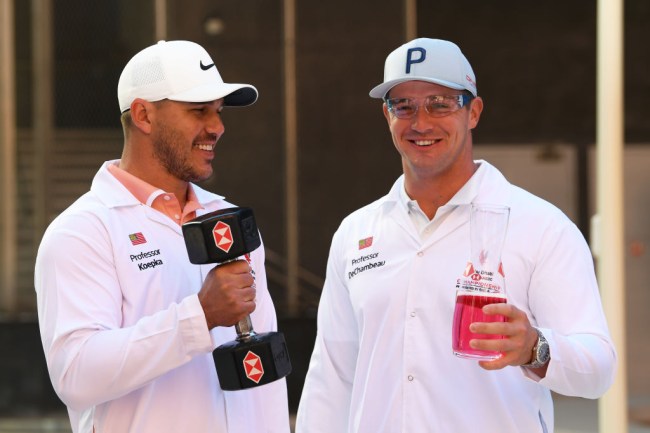 Outside of getting ready for the 2020 PGA Tour season, Bryson DeChambeau has only been doing pretty much two things and that is working out and streaming Fortnite on Twitch. Well, on Wednesday afternoon those two worlds collided and Brooks Koepka, the No. 1 player in the world, was in the middle of the conversation.

During his stream, DeChambeau was talking about his own body and then a viewer asked him about Koepka’s body, which there’s no arguing that Koepka is fit and also built like a boulder. DeChambeau immediately recalled Koepka’s ESPN Magazine’s Body photospread from a couple of years ago and pointed out the fact that he didn’t have any abs and hit us with a ‘I have abs’ statement as if we were all worried about that.

"Yea I weigh more than him now. Significantly more."

"Did you see the body issue? He didn't have any abs. I have abs."

Wow, just wow. Let’s not forget that this is a conversation that’s taking place on Twitch where the average age of DeChambeau’s viewers here is probably around 13-years-old. Also, the end of the clip where he’s talking about ‘against regulation here,’ he’s suggesting that he would lift up his shirt and show everyone his abs if it didn’t mean he would get in trouble with Twitch.

Yes, he was about to do that.

It’s cool and all that DeChambeau is getting fit, strong as hell and pounded the golf ball now, but to essentially talk bad about the body of the No. 1 player in the world and then flex about the fact that you’ve acquired some abs is…interesting.

Related: Bryson DeChambeau Wants You To Know He Works Out, Posts Very Awkward Video Of Him Simply Leaving The Gym

DeChambeau and Koepka are both teeing it up this week in the Abu Dhabi HSBC Championship so we’ll keep an eye out if Koepka responds or something happens throughout the tournament. Let’s hope the golf gods bless us and the two are paired up together at some point this weekend.