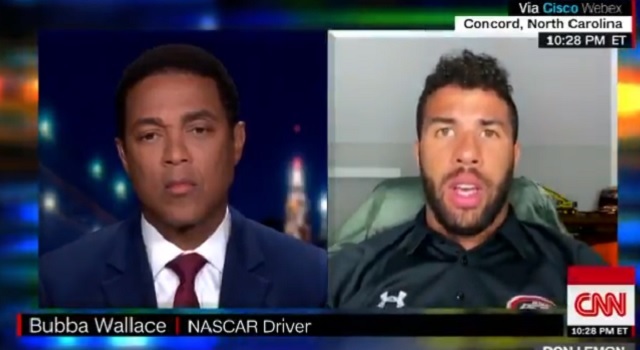 On Tuesday afternoon the FBI and NASCAR revealed that Bubba Wallace was not subjected to a hate crime when a noose was found in his garage at Sunday’s Cup Series race at Talladega.

The FBI concluded that the “noose” was a knot tied to make the garage door easier to bring down. They also found that the knot that had been around since October 2019.

Wallace appeared on CNN for an interview with Don Lemon to give his side of the story and to give his reaction to people on social media accusing him of faking the incident for publicity.

"I'm pissed. I'm mad because people are trying to test my character and the person that I am and my integrity." – NASCAR driver Bubba Wallace on social media reaction to the conclusion of the FBI investigation into the noose found in his team's garage https://t.co/YH4ynYqv64 pic.twitter.com/fB0m9Yj9FD

“I’m pissed. I’m mad because people are trying to test my character and the person that I am and my integrity. They’re not stealing that away from me but they’re just trying to test that.

Wallace goes on to explain that he had never seen a garage pull like the one he had been shown in images at Talladega.

“The image that I have, that I have seen, of what was hanging in my garage is not a garage loop,” “I’ve been racing all of my life, we’ve raced out of hundreds of garages that have never had garage pulls like that.”

"I've been racing all of my life, we've raced out of hundreds of garages that never had garage pulls like that. … It's a straight up noose."

“The image that I have and I have seen of what was hanging in my garage is not a garage pull,” says NASCAR driver Bubba Wallace.

“It was a noose. Whether tied in 2019, or whatever, it was a noose." https://t.co/LpRUdKboaH pic.twitter.com/hQGreK5Ofs

For reference here’s what the garage pull looked like at Talladega.

Apologies for not knowing who originally created this image, but it has been making the rounds on Twitter and turned out to be correct. You can see in the left photo the rope was in noose form — apparently as a handle — last year and then cut for evidence Sunday. pic.twitter.com/MIrtF3uqtN

In Wallace’s defense, he never saw the “noose” in person, instead a member of his team alerted NASCAR, who then released a statement and conducted an internal investigation alongside the FBI.