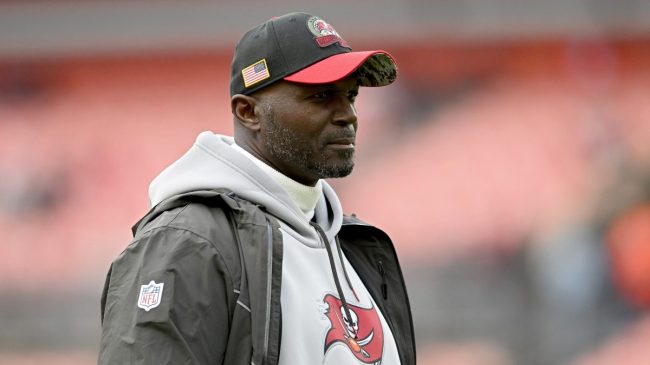 The Tampa Bay Buccaneers took a bad loss to the Cleveland Browns on Sunday. Since then, many have voiced their frustrations about head coach Todd Bowles. Especially after he blundered the fourth quarter away in a game that could have been won in regulation. Now, it sounds like he’s making a baffling admission that has the fanbase tearing him apart.

First, Bowles came out and claimed he “didn’t want to risk an interception,” per Rick Stroud. Tom Brady’s thrown 420 pass attempts with just two interceptions. Considering how efficient Brady is in maintaining possession, you’d think the Buccaneers would give him a shot to make a play.

Todd Bowles didn’t want to risk an INT at the end of regulation Sunday, even though Tom Brady has 420 pass attempts and 2 INT, a .04 INT pct. After a screen gained a yard, he didn’t call time out. Then Brady hit Julio Jones for 26 yds. By then there was only 8 sec. left. pic.twitter.com/OcwacDU3pQ

Now, however, the Buccaneers’ head coach comes out and admits what really was going on in his head during that late fourth-quarter situation. According to Rick Stroud, Todd Bowles claims, “We said if we didn’t get yards on the first play, we wouldn’t call timeout. We would probably let the clock run. If he saw something, he could throw it. But we didn’t get any yards on the first play. We got 1 or 2 yards with Rachaad [White] and we were backed up.”

And with that, Todd Bowles admits he was playing for overtime rather than giving Tom Brady, the best quarterback ever, a chance to drive the field and win the game. So, with that in mind, you can easily understand why Buccaneers fans are ripping Bowles apart.

Bowles don’t coach like a winner. Like I said before, I really wanted Bowles to be a good HC. I seriously did. He’s not. Some just aren’t cut out to be a head coach. He should clearly stick to focusing entirely on coaching defense. Is the only NFL success he’s got.

Playing scared. Complete opposite of BA and his “no risk it , no biscuit” philosophy

It’s insane to not even give the GOAT a chance to win the game.

I cannot see how anyone can justify keeping this coaching staff in place after this season (short of an improbable SB run).

This season has been an absolute roller coaster for the Buccaneers. Maybe they can turn it around in time. However, when your head coach plays for overtime, then the season might be done already.