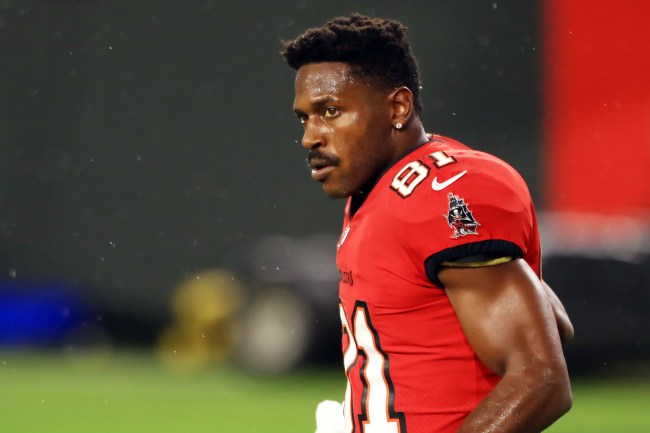 Antonio Brown signed with the Bucs two weeks ago after serving an eight-game suspension, and we’re now just learning that he may have been involved in another off-the-field incident before he made his way to Tampa Bay.

According to David Ovalle of the Miami Herald, Brown was recently accused of angrily destroying a surveillance camera and throwing a bike at a security guard shack after he was repeatedly fined by his homeowners association for violating their policies. The HOA president told police that she was not going to press charges against the NFL wide receiver because she feared Brown would retaliate against her employees.

Antonio Brown, the superstar wide receiver who recently returned to the NFL after a slew of off-the-field troubles, was accused last month of angrily destroying a surveillance camera at the gated community in Hollywood where he lives and throwing his bicycle at a security-guard shack, according to a police report obtained by the Herald.

Hollywood police determined it had probable cause to charge Brown with misdemeanor criminal mischief for the Oct. 15 incident, the report said. But the homeowners association president declined to press charges, according to the report, police saying she feared Brown “may retaliate against her employees

The HOA president has since backtracked on her previous comments and now says all issues with Brown have been resolved.

All this stems from squabbles with Brown’s HOA, which had fined him and was forcing him to meet guests in person at the community’s gates entrance. His spokeswoman said the issues “have been fully and amicably resolved, and everyone is getting along just fine.”

Sylvia Berman, the HOA president, downplayed the incident on Monday. “It’s not that we’re afraid of him,” Berman told the Herald. Instead, she said, the board thought the incident was too minor to press charges and Brown had agreed to replace the broken camera.
A spokesperson for Brown said Monday that she has been “assisting Mr. Brown for several months to resolve certain minor disputes with the housing authority

Update: The Bucs have released a statement on the latest Antonio Brown incident.

Buccaneers statement regarding Antonio Brown:
“We are aware of the reported incident involving Antonio Brown prior to his signing. When Antonio joined us, we were clear about what we expected and required of him. Thus far, he has met all the expectations we have in place.”