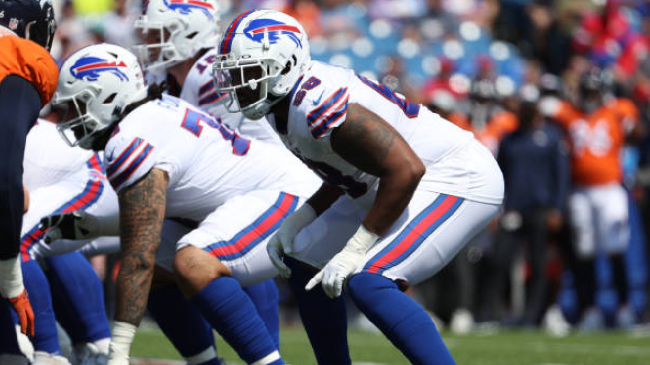 The first game of the NFL’s Week 2 Monday Night double header couldn’t have gone much better for the Buffalo Bills. They absolutely destroyed the Tennessee Titans, never seeming to be in any danger of picking up their first loss of the season as they rolled to a 41-7 win.

However, despite all of the reasons the Bills had to be happy after last night’s game, it seems one of their players had some beef after the game.

On the way to the tunnel, as the rest his team was shaking hands, Bobby Hart decided to go after a player from the Tennessee Titans. Once he found the player, he threw a punch that missed the player he was after and instead hit a Titans coach.

Today, the NFL handed down a 1-game suspension as a result of the incident.

As both teams were heading to the tunnel, you walked directly across the field seek out your opponent. You approached him near the end zone and a coach had to hold you back as others shook hands. Once you and your opponent were in the end zone near the tunnel, you confronted him and immediately swung at him with a closed fist, striking the head of a Tennessee coach. Your aggressive conduct could have caused serious injury and clearly does not reflect the high standards of sportsmanship expected of a professional.

It’s not yet clear what exactly caused Hart to go after his opponent when you’d think the Titans were the only ones with anything to be upset about after getting destroyed in primetime.

Whatever the reason, the Buffalo Bills will now be without one of their offensive linemen for their Week 3 matchup against the Miami Dolphins.