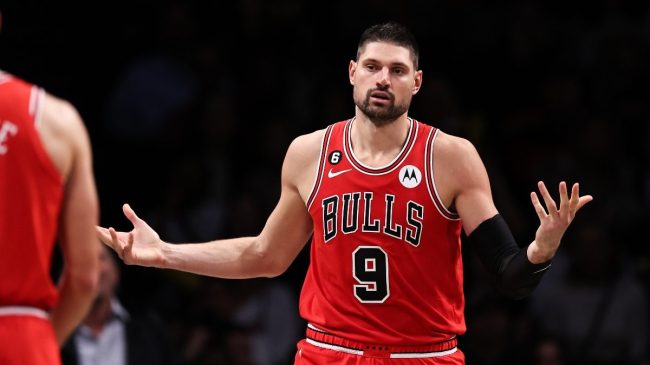 The Chicago Bulls have gotten off to a slow start early on this season and frustration may be building. On Wednesday night, as the team took on the New Orleans Pelicans, star center Nikola Vucevic was caught flipping someone off in the crowd. It’s kind of a funny moment, as nobody is sure why or to who Vucevic is giving the bird.

Bleacher Report shares the quick clip. Immediately after referees called Vucevic for a travel, the Bulls center turns up court. With the camera fixated on him, Nikola Vucevic releases the bird to some random fan sitting in the stands. Give a watch yourself below.

Who pissed Vuc off? 😅 pic.twitter.com/rBkEEDJPy7

Nobody is sure what was said, or exactly why Vucevic flipped someone off. Either way, it happened it was caught on the broadcast. It was terrible, or perfect timing, depending on how you look at it. Either way, the Bulls walked out of the game with a loss to the Pelicans.

After 13 games, Chicago sits 6-7. It’s been a struggle so far this season for the Bulls as they can’t get the ball rolling. It’s easy to imagine that frustration is beginning to boil over and Vucevic giving someone the bird is a result of the slow start.

With that in mind, keep an eye on Chicago for now. They need to find a way to light a fire under them to turn things around. If not, then this could be a long year for the Bulls. Look for them to potentially bounce back on Sunday, as they face off against the Denver Nuggets.