Brackets Are Officially Busted With Gonzaga, Arizona Losing And The Social Media Reaction Is Hysterical 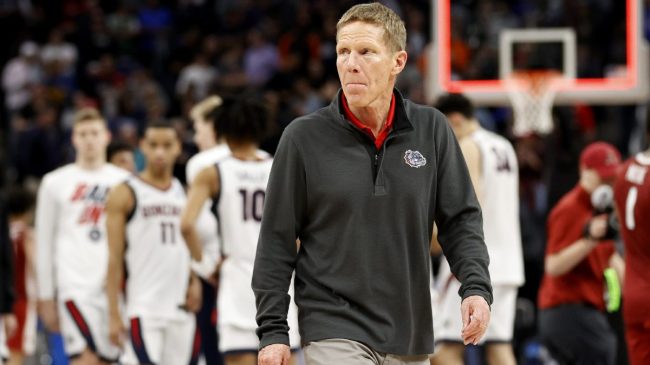 With Gonzaga and Arizona both losing on Thursday, three of the top four teams have been eliminated from NCAA Tournament play. The Wildcats and Bulldogs join Baylor as No. 1 seeds to receive an early exit.

Arizona and Gonzaga entered March as the championship favorites according to Las Vegas. For that reason, those two teams were picked often in March Madness brackets. Unfortunately, neither was able to survive the second weekend of play, and they’ll both be watching the next few rounds from home.

Instead, we’ll get to see a few underdogs take their chances at a title run.

Miami and Iowa State face off Friday, ensuring that at least one double digit seed will make the Elite Eight. Saint Peter’s is still alive after taking down Kentucky and Murray State as a 15-seed.

Arkansas, Houston, and Providence are still kicking, too.

Of course, there are still a few blue bloods remaining. UCLA and UNC will face off Friday with an Elite Eight trip at stake. And then there’s Kansas, who’s the last No. 1 seed standing.

It’s been a wild month of March.

The chaos that’s been witnessed over the last week and a half has been great for viewers, but downright awful for brackets.

The two upsets on Thursday night have wreaked havoc on college basketball bettors. Gonzaga, in particular, entered tonight’s matchup as a near 10-point favorite.

With the Wildcats and Bulldogs being the two heaviest favorites to take home the title, social media is having a night with bracket busting results.

Take a look below.

Going to bed with Gonzaga and Arizona in the finals of my bracket pic.twitter.com/q4VpHqaFog

“Gonzaga and Arizona are the two best teams” pic.twitter.com/24y1IHWhRv

“Gonzaga vs. Arizona is my National Championship game” pic.twitter.com/zsyYTiN2j4

Selection Sunday: “I like Gonzaga, Baylor, Arizona, and Auburn to make the Final Four this year”

Baylor, Gonzaga and Arizona meeting up in Cancun pic.twitter.com/we57J3poAD

Tough night for the Arizona vs. Gonzaga in the national championship game crowd.

Gonzaga and Arizona got pushed around

Can we collectively admit the western part of the country is overrated at this game of basketball? Gonzaga and Arizona 🤢

Kansas is the lone remaining No. 1 seed after Gonzaga and Arizona go down tonight.

Only twice since 1985 have no No. 1 seeds advanced to the Final Four.

27 years ago today was the last time two No. 1 seeds fell on the same day in the Sweet 16 🤯 pic.twitter.com/sKpGJ7fdTq

… all eliminated in the men’s tourney before the Elite Eight.

Most bet on teams to win the NCAA Tournament at @BetMGM:

Everyone who had Gonzaga & Arizona in their Championship pic.twitter.com/t73ZF4mR22

The next few rounds of play should be fun to watch. Maybe we’ll all enjoy a little more now that our championship contenders have all been eliminated.