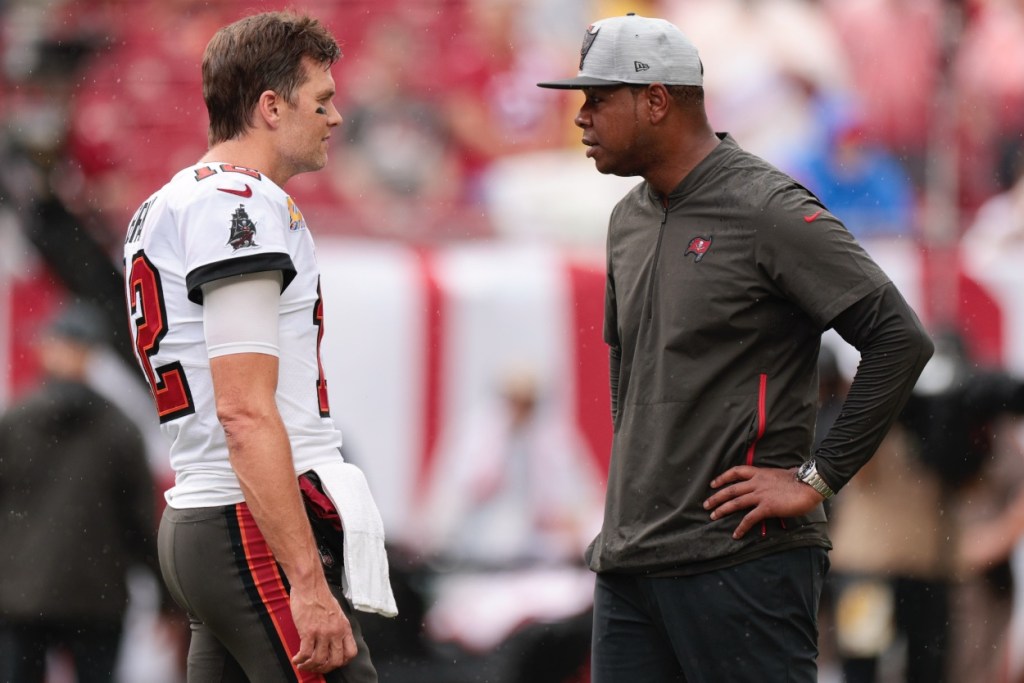 Tampa Bay Buccaneers offensive coordinator Byron Leftwich has his eyes set on winning the NFC South division this weekend and then preparing his team to win back-to-back Super Bowls. He has one the best jobs in the entire NFL because he gets to coach and learn from Tom Brady, he’s on the reigning Super Bowl champion team, and he lives in Florida with no state income tax and only has to pay the jock tax on road games.

When the Jacksonville Jaguars fired Urban Meyer on Wednesday night, a move that had been coming for months, rumors immediately began swirling on who the Jaguars should and would hire as their next head coach.

The Jaguars will promote Darrell Bevell as interim head coach but names have been tossed around left and right from Marvin Lewis to Doug Pederson to Josh McDaniels and basically every other name in the sport. But Jags fans are desperate for Bucs OC Byron Leftwich and many see it as a natural fit because he played QB for Jacksonville for several seasons and lives in the state of Florida.

It’s all rather easy and obvious. Fire Urban now. Hire Byron Leftwich. It would be such a massive win on every level. #Jaguars

Would have to think that Byron Leftwich is the overwhelming favorite for the Jags job. No brainer.

Byron Leftwich is the ONLY correct answer. https://t.co/dPrvqegy8k

Jim Caldwell, Brian Daboll, Byron Leftwich, Kellen Moore, and Josh McDaniels would all be on my interview list.

The rumors moved so fast that Byron Leftwich was actually asked about the rumors and responded within about 12 hours of Urban Meyer getting fired. Here’s what he had to say

When asked about a HC opening in Jacksonville, Byron Leftwich walked off saying “I’m just trying to win a division.”

It would appear she either missed his answer or he was asked twice.

Leftwich, a very deserving head coaching candidate and former Jags quarterback, was wrapping up his media session when the Jax situation was brought up. Leftwich smiled, but wouldn’t entertain the question as he was leaving. #GoBucs

Byron wants absolutely nothing to do with this discussion right now when his team is in the hunt for another Super Bowl. That can and will likely change when the season is over but Byron Leftwich will only do himself favors by making another deep run in the playoffs which would help his contract negotiations regardless of what he decides to do.

The Athletic’s Tampa Bay Buccaneers reporter, Greg Auman, had this to add:

For Bucs fans, the biggest ripple effect of Urban Meyer's firing is the Jacksonville opening. Bucs OC Byron Leftwich, who was drafted by the Jaguars and played there from 2003-06, is a logical candidate there, given his success with Bucs, still just 41 years old. https://t.co/OpdWwcoYEN

It’s quite possible that Byron Leftwich leaves the Buccaneers for the Jaguars HC position next season but he truly has one of the best jobs in the NFL right now and it will be hard to pry him away from the chance to work with Tom Brady for another season if Tom comes back for one more.