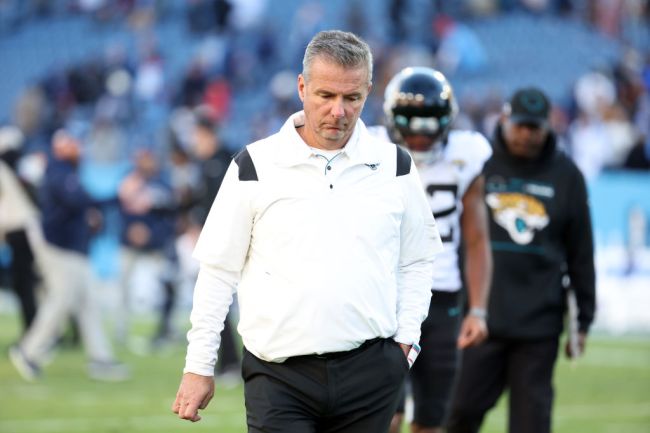 According to ESPN’s Adam Schefter, the team decided to fire Meyer on Wednesday night.

After less than one year in Jacksonville, Urban Meyer is out as the Jaguars’ head coach, sources tell ESPN.

Urban Meyer signed a five-year contract with the Jaguars in January 2021. He didn’t make it to the one-year mark.

After less than a year, Urban Meyer is out in Jacksonville. A tumultuous, controversial tenure comes to a proper end. https://t.co/FqAKXQswaI

“I’m in a lunge position,” “Left leg forward, right leg back. . . . Urban Meyer, while I’m in that stretch position, comes up to me and says, ‘Hey, Dipshit, make your f–king kicks!’ And kicks me in the leg.”

“It certainly wasn’t as hard as he could’ve done it, but it certainly wasn’t a love tap,” Lambo said. “Truthfully, I’d register it as a five [out of 10]. Which in the workplace, I don’t care if it’s football or not, the boss can’t strike an employee. And for a second, I couldn’t believe it actually happened. Pardon my vulgarity, I said, ‘Don’t you ever f–king kick me again!’ And his response was, ‘I’m the head ball coach, I’ll kick you whenever the f–k I want.’”

Update: Jaguars owner Shad Khan made it official in a statement.

Jaguars’ owner Shad Khan: “After deliberation over many weeks and a thorough analysis of the entirety of Urban’s tenure with our team, I am bitterly disappointed to arrive at the conclusion that an immediate change is imperative for everyone….”

“I informed Urban of the change this evening.  As I stated in October, regaining our trust and respect was essential.  Regrettably, it did not happen.”