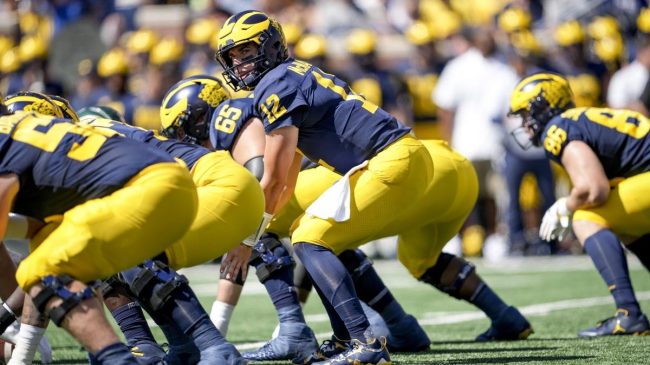 Cade McNamara’s spot in Michigan Wolverines history is secure. The Nevada native will long be remembered as the quarterback that led the Wolverines to their first College Football Playoff and snapped an eight-game losing streak to hated rival Ohio State.

McNamara cashed in on that notoriety in the offseason when he agreed to an NIL deal with golf equipment and manufacturer Ping.

The best quarterbacks know that they always have to take care of the big guys who protect them. That’s why McNamara gifted each of his offensive linemen.

But rather than praise, McNamara received nothing but ridicule for the gift.

That’s because the Michigan signal caller is currently locked in a battle for his starting job with sophomore JJ McCarthy. McCarthy played sparingly for the Wolverines in 2021 but many fans of the program hoped to see him start in 2022. Instead, Michigan coach Jim Harbaugh settled on what he a called “biblical” solution to the problem.

McNamara would start the team’s first game against Colorado State, while McCarthy would then play in Week Two against Hawaii.

The Wolverines hammered the Rams in week one and McNamara did get the start, going 9-of-18 for 136 yards and a score. But McCarthy also played and looked good in limited action. The former five-star recruit went 4-of-4 for 30 yards through the air and ran the ball three times for 50 yards.

That was enough for fans to make up their minds. It was time for McCarthy to be named the starter. Now McNamara will have plenty of time to put those golf clubs to good use.

A Ping driver is more of an insult than a gift really. Hopefully JJ raises him with TaylorMade. https://t.co/oeuqlkNJ3V

Buddy, now is not the time to golf https://t.co/eWvn7TWlbT

Some wondered if McNamara should’ve played less golf in the offseason.

Is this a sign that Cade spent too much time golfing this past summer? https://t.co/w2kgI8Tv6q

While others just loved the look of the clubs.