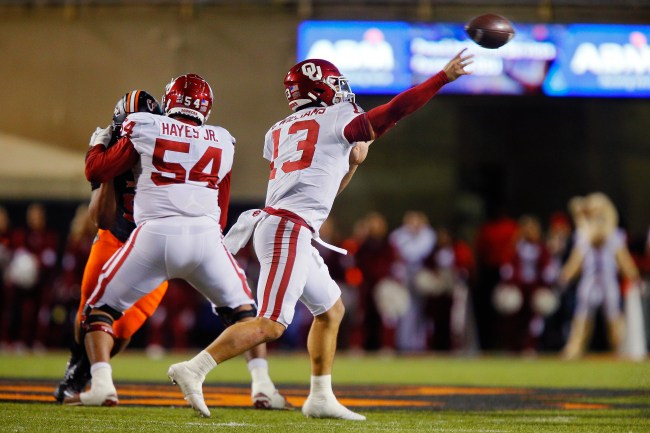 Since announcing his decision to transfer, former Oklahoma quarterback Caleb Williams has been the biggest name in the transfer portal. He has been linked with quite a few of college football’s biggest programs and his decision has dragged on for a while. However, it seems his transfer saga may soon come to a close.

It is now being reported that he has narrowed down his options to 2 schools, USC and LSU.

It’s obvious why Williams’ transfer drew so much attention. The 5-star recruit didn’t take long to make an impression in his freshman year. After taking over the starting QB job from Spencer Rattler, he threw for 21 Tds and only 4 interceptions while nearly leading the team to a Big 12 title.

Both LSU and USC have already gone through some major changes this offseason. LSU let go decided in the middle of the season that they’d be letting go of Ed Orgeron. They eventually brought in Notre Dame’s Brian Kelly to replace him.

USC brought in Williams’ former head coach Lincoln Riley to take over their head coaching job. Then each of their options at starting quarterback for next season chose to enter the trasnfer portal. Now Riley is once again recruiting the quarterback he coached at Oklahoma.

USC has long been the frontrunner to land Williams and it seemed like a done deal over the weekend. The announcement of his Oklahoma teammate Mario Williams, who had stated he’d follow Caleb Williams, committing to USC looked like all the confirmation we would need.

Whoever does end up landing Caleb Williams will be expected to bounce back from a disappointing year and finish among the top teams in college football.