A Cal-Berkeley Student Won $5,000 In Bitcoin By Catching Punts In Electric Fashion 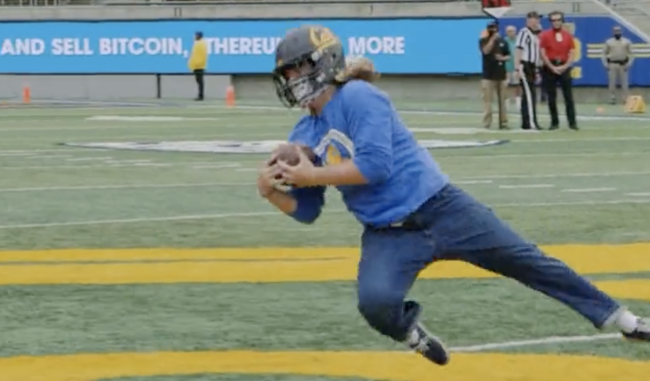 The University of California, Berkeley found its first win of the football season on Saturday by defeating Sacramento State 42-30. While the game itself was a positive sight for Golden Bears fans, it was even better for one long-time fan in particular.

Back in August, ahead of the 2021 season, UC Berkeley signed an extremely unique naming rights deal. The school agreed to a deal with cryptocurrency giant FTX for naming rights to its football (and rugby) field.

Yes, you read that right. It is called FTX Field at California Memorial Stadium, which might be the most Cal Berkeley thing ever.

And to make things even more interesting, FTX paid the school $17.5 million in cryptocurrency for the rights. What a time to be alive!

Making plays and getting paid.

As part of the agreement, FTX is a big part in sponsorships and promotions. That was the case on Saturday when Northern California native Matt Tognolini was selected to participate in an on-field giveaway.

Tognolini, who is a sophomore Phi Kappa Psi, was tasked with catching three punts. If he successfully pulled in all three, he would win $5,000 in Bitcoin from FTX.

After holding on to the first two, the pressure was on. Togs stayed calm.

He overran the third and final kick at first, but he made a great adjustment to lean back and make the great grab.

With $5,000 in Bitcoin headed his way, Tognolini threw off his helmet and celebrated by pumping up the crowd while his glorious locks flowed behind him.

Long-time Cal fan, Matt caught all three punts for our @FTX_Official Punt Challenge for all the marbles! pic.twitter.com/Rju2TBGifU

While it might have been the most Cal Berkeley promotion in the history of promotions, it was electric. Tognolini made the play of the day and FTX had to pay. You simply love to see it.