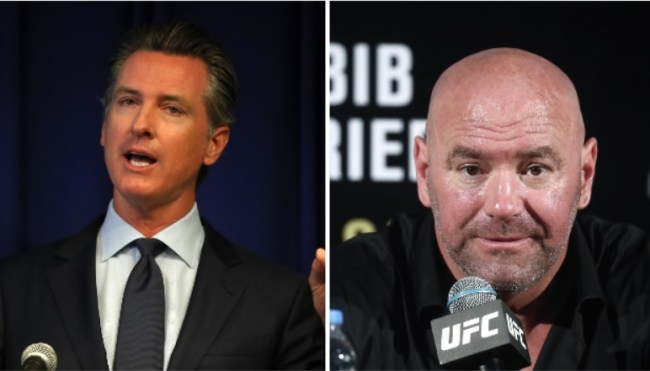 UFC 249 is not taking place on April 18th after all despite Dana White’s best efforts.

On Thursday night, the UFC president announced that UFC 249, which was set to take place on tribal land at the Tachi Palace in California in less than two weeks got postponed because their broadcast partner ESPN stepped in and told him to “stand down”.

BREAKING: UFC 249 has been canceled. All UFC events postponed indefinitely, due to COVID-19. Dana White says he was ready to promote the event but things were taken out of his control. Much, much more on this to come.

UFC 249, which was supposed to happen April 18, has been canceled.

Dana White confirms to @bokamotoESPN that he was asked to “stand down” by top Disney/ESPN executives and so he is doing so.

Dana White (@danawhite) also made it clear to me after we wrapped the interview the UFC will still promote 42 events this year, which it was originally scheduled to do.

According to the NY Post, California Governor Gavin Newsom, who is currently enforcing a stay-at-home order in the state to combat the spread of the coronavirus, called executives at ESPN’s parent company Disney directly and put pressure on the media giant to cancel the UFC event.

The Post also learned California Gov. Gavin Newsom played a leading role in getting the event canceled. According to sources, Newsom called Disney chairman Bob Iger and requested ESPN force the UFC to cancel the event set for the Tachi Palace Casino Resort outside of Fresno, Calif.

Sources said ESPN agreed that holding the event at this time “just didn’t feel right.” After speaking with Newson, ESPN executives told White they needed more time to assess what’s going on with the COVID-19 curve, testing procedures and other factors. White had no choice other than to cancel the event.

Despite the setback, White vows that the UFC will be the first back once the health crisis in the country settles down.

Dana White to @bokamotoESPN: "We will be the first sport back. Fight island is real. It's a real thing. The infrastructure's being built right now, and that's really going to happen. And it will be on ESPN."