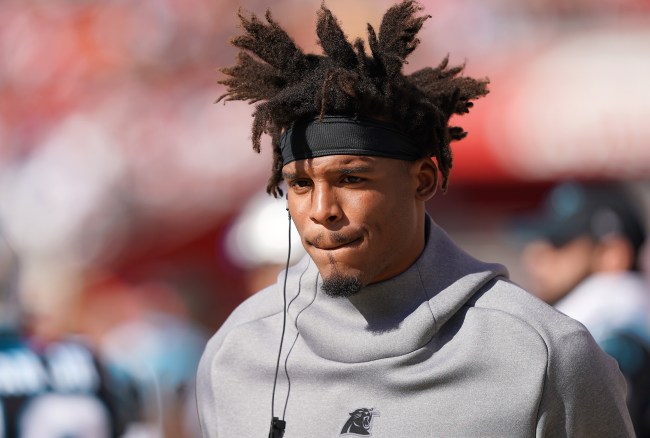 Some kids just have no respect.

In the video, the teen could be heard yelling “You’re a free agent, you’re broke” to Newton who responded by saying he’s “rich” and asking where the kid’s dad was at.

Cam got a little triggered 👀 pic.twitter.com/D7MZkLdorg

Twitter had some thoughts on the teenager being disrespectful to an NFL player.

What a punk that kid is. You’re talking to a former MVP and QB who played in the SB. Probably out there to support a group/charity too. Show some respect! https://t.co/Z6Yr0vdJPY

Y’all can save that “be the bigger person” for the next guy. Idc if this a teenager, fuck them kids and the clout chasing energy lol. I would’ve went hard on his little bitch ass lol. Talking to a former MVP crazy like he a for sure first round draft pick lol. https://t.co/pyP1hjGCik

he ain’t triggered social media give kids to say whatever with no respect.. lol boy got in cam shirt 😂 that “i’m rich” having ppl on they feelings 😂 #MVPCam (Cam always been one my favorites) ✊🏾 https://t.co/Sf4FJpkj3q

We think that athletes always measure themselves by the standards of their contemporaries.

I’d like to think they measure themselves up to the average person.

Yeah he’s a free agent in the NFL who’s made millions of dollars and won an MVP. What have you done? https://t.co/UKamf35B3G

Young boy wanted some giggles from the homies and likes online instead of asking for OG advice on how to get to THE SHOW! https://t.co/vWpQfzfigl

What is wrong with this kid. Cam has accomplished more than anyone could dream of … seriously this is a generational issue – have some respect kid https://t.co/aqjaLZ0V36

Lot of folks way too comfortable saying anything to anybody. Teenager or not, you don’t buck at somebody and then be shocked they respond.

Lil coward thought he was tough and looked like a fool https://t.co/0UhQnkmbYu

21' folks disrespect folks and think they can control their reaction. When folks start going upside people head then what? https://t.co/iK5Rtf96dM

Never in life will it be ok for a CHILD to disrespect and speak to a grown person like that. This entire thing triggered me. https://t.co/8yLjHlv3AB