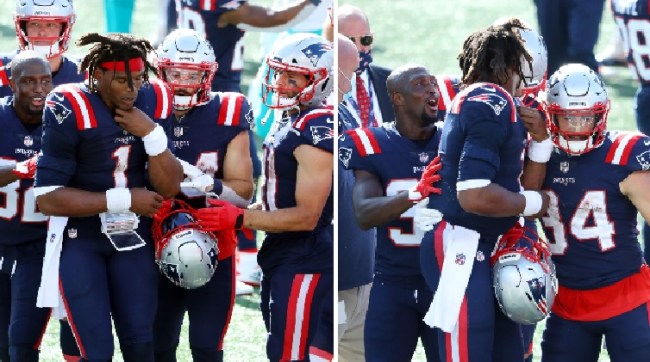 Things got a bit heated at the end of the Dolphins-Patriots game.

After the game was over, Newton got into a back and forth with several Dolphins players, and things escalated a bit when one of the Dolphins players tried to snatch Cam’s chain from his neck.

Cam Newton is very upset with some of the Miami players. Had to be restrained by a few members of the Patriots, including Rex Burkhead.

Looks like Cam Newton and Elandon Roberts had words briefly, then Christian Wilkins and Raekwon Davis came over to Newton – and Davis tried to snatch Newton's chain.

Here’s the video of the incident.

CAM NEWTON IS BACK! pic.twitter.com/BaSgyCheLn

Here’s a closer look at the Dolphins player trying to snatch Cam’s chain from his neck.

Here’s the video for you when the chain was pulled off his neck and you can see it fall from Cam Newton hands. I would be pissed too 🤷🏾‍♂️ pic.twitter.com/amWYoZ0zGP