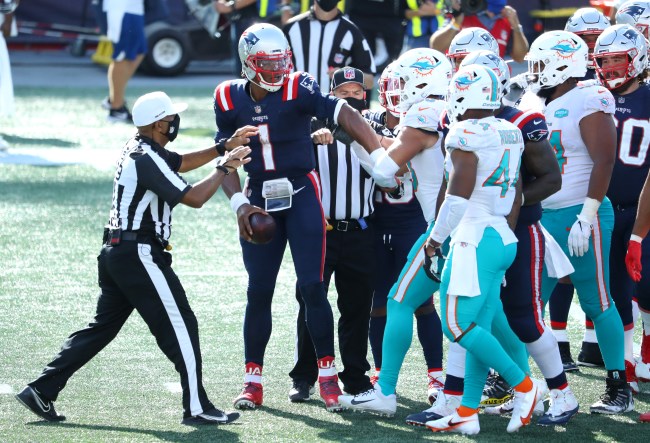 Cam Newton doesn’t seem too fond of the Miami Dolphins or Christian Wilkins.

After today’s Patriots-Dolphins game, Newton got heated with several Dolphins players including Wilkins.

CAM NEWTON IS BACK! pic.twitter.com/BaSgyCheLn

During the altercation, one of the Dolphins players tried to snatch Cam’s chain from his neck.

Here’s the video for you when the chain was pulled off his neck and you can see it fall from Cam Newton hands. I would be pissed too 🤷🏾‍♂️ pic.twitter.com/amWYoZ0zGP

While speaking to the media, Newton blasted the Dolphins players for trying to snatch his chain. He also went on to take a hilarious shot at Wilkins.

“You just have to realize who you’re talking to… I realized I
was talking to a person known for doing splits. So that was uncharacteristic of myself to keep on going back and forth. But at the end of the day, it’s football.” pic.twitter.com/y5Fz2qdTz3

Patriots QB Cam Newton on the postgame scuffle with Miami, and it appears we have ourselves another attempted chain snatching here. Also, on Christian Wilkins …

"You have to realize who you're talking to. … I realized I was talking to a person that's known for doing splits." pic.twitter.com/mBzbhSogl3