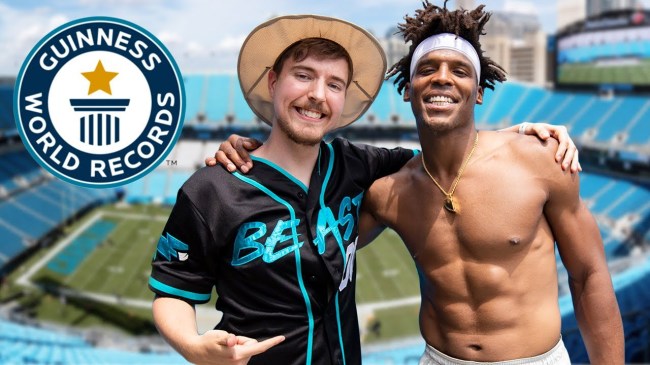 Panthers quarterback Cam Newton had an arthroscopic procedure done on his right shoulder in January, so Carolina football fans were more than a little concerned about how well he would be able to thrown when training camp opened in July.

It turned out that Newton was just fine, uncorking at least 40 passes including several deep balls on his first day throwing in camp.

None of this would have been a concern had Panthers fans only known that Newton was already in top form, breaking not one, but three different football-related Guinness world records at Bank of America Stadium that same month.

With the assistance of YouTuber Jimmy “MrBeast” Donaldson, Newton was able to break two records previously set by the guys over at Dude Perfect – longest catch between the legs (39 yards) and longest pass to a blindfolded, moving target (24 yards) – and one set by current Browns receiver Jarvis Landry – most one-handed catches made in 60 seconds.

Perhaps this is the inside information the ballsy bettor who plunked down $9,500 on the Panthers to win this year’s Super Bowl at 50-1 odds used?