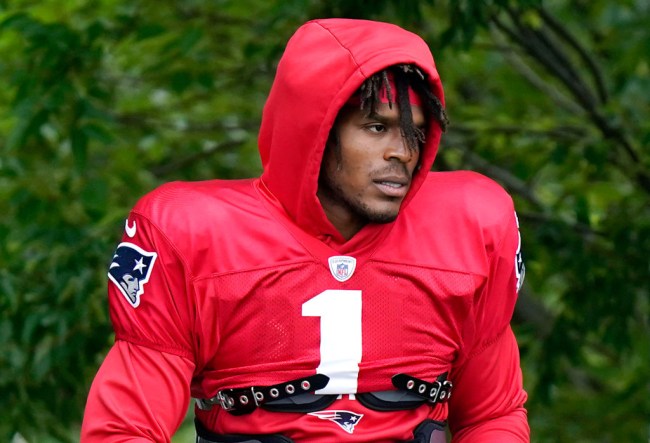 Cam Newton and the new-look Patriots took the practice field in pads for the first time on Monday. There aren’t any signs that it was a bad practice for Newton by any means, but you better believe that since Newton took the field with his new team someone out there was going to throw out a flaming hot take despite basing said hot take on practically nothing.

Emmanuel Acho is that man.

During a segment on Monday’s edition of ‘Speak For Yourself,’ Acho brought up a quote from head coach Bill Belichick that came during his Friday press conference in which he referred to Newton as a “hardworking kid.” Acho took that phrase and ran with it and somehow came to the conclusion that Belichick must look at Newton as the team’s third-string quarterback if he’s describing him as a kid.

The Patriots view Cam Newton as a 3rd stringer.

You want to know why this is one of the worst hot takes we’ve seen this year? It’s because Acho is a former NFL player and knows exactly how Belichick and the Patriots operate. There’s a reason every football fan knows about ‘the Patriot way’ in which there are no handouts when it comes to New England. Belichick keeps things extremely close to the vest including who may be his starting quarterback in Week 1.

As Acho points out, Newton is a former Heisman Trophy winner and league MVP, but he’s also a guy that’s battled big-time injuries and played in just two games last season. Having said that, his competition of Brian Hoyer and Jarrett Stidham shouldn’t really be a threat, but again, we won’t know much until Week 1 rolls around.

It would be shocking not to see “the hard-working kid” start in the Patriots opener, which Acho knows as well, but he’s in the business of making a scene as you can see in the video above.