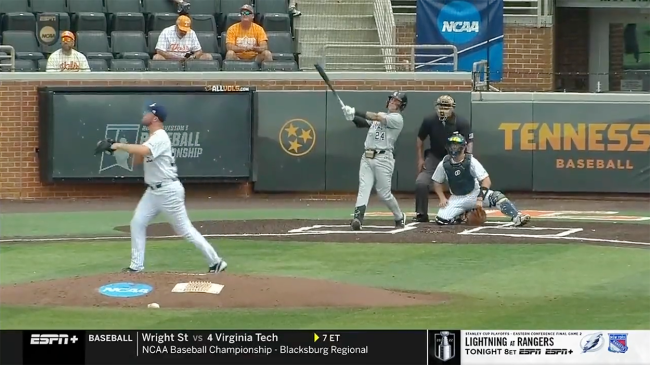 Campbell baseball has quickly become America’s Team during the 2021 and 2022 seasons. The Camels have been on an absolute tear and earned their fourth-straight Regional birth with a 40-17 record this spring.

Although it got a very difficult draw as the three-seed in the Tennessee regional, there was a lot of noise surrounding Campbell’s chances to maybe, just maybe sneak into a Super Regional. Stranger things have happened.

Speaking of strange, as the Camels took to the field for their first game of the weekend against the Georgia Tech Yellow Jackets, their pitcher’s father went viral. Thomas Harrington, Campbell’s ace, was on the bump on Friday and his dad was in the stands in Knoxville.

A man in the stands started grabbing eyeballs from baseball-watchers around the country for wearing a very weird crying baby mask.

Literally what is going on at the Knoxville Regional @nocontextcws @ReggieChatman find this man pic.twitter.com/qjO0McWVJB

Then Atlanta-based beat reporter, and true man of the people Reggie Chatman Jr. went on a quest to find out more. As it would turn out, the man wearing the strange mask was none other than Tommy Harrington, the starting pitcher’s dad.

As the story goes, the elder Harrington broke out the mask during the Big South Conference Tournament. After doing so, Campbell went on to work its way through the loser’s bracket, win the championship and make the postseason.

To make it even better, the bottle was not purchased separately. Chatman Jr. shared that the bottle is one that Harrington uses to feed cattle because he is a farmer.

It is truly weird and truly incredible. And apparently it works! As of the sixth inning, the Camels were up 11-2.