Can Jayson Tatum Fulfill The Shattered Legacy Of Len Bias? 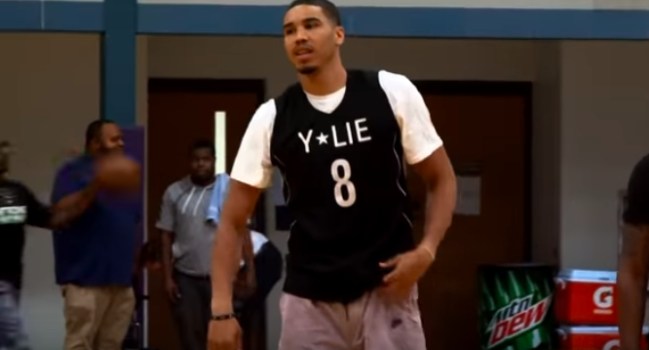 On the morning of June 20, 1986, I walked into a basketball camp at West Springfield High School in Virginia, located just outside Washington D.C., and was greeted by my teammate, David Menser.

“Did you hear about Bias?” he asked.

“Hear what?” I responded.

“Bias” was Len Bias, and while that name might not mean anything to anyone under the age of 40—as a young, remarkably unremarkable high school basketball player who was born in 1971, and watched Atlantic Coast Conference telecasts weekly—he was a hardwoods God.

A first-team All-American at the University of Maryland, on June 17, Bias had been selected by the Boston Celtics with the second overall pick in the 1986 NBA draft. Two days later, his tragic death from a cardiac arrhythmia induced by a cocaine overdose not only rocked the Washington, D.C. area, but the entire basketball world.

“When Bias died I did a cover story on it,” legendary Sports Illustrated NBA writer Jack McCallum told me. “I have (former Celtics legend Larry) Bird reflecting on how good he thought Bias would be. He loved him as a player.”

Bird, the Basketball Hall-of-Famer, was devastated.

“It’s the cruelest thing I’ve ever heard,” he told McCallum.

The 6’9, 210-lb. Bias was a gifted mid-range shooting, slashing forward and an authoritative, high flying finisher. He was a transcendent figure on the court who former Boston coach and team president Red Auerbach expected to lead the Celtics franchise beyond the Bird championship era. Instead, in the wake of Bias’ death, Boston would begin to flounder. Between the 1993-94 and 1997-98 seasons—when Bias would have arguably been in his prime—the Celtics averaged just 30.2 wins.

“This is my 24th year at Duke,” Duke Coach Mike Krzyzewski told the Boston Globe’s Bob Ryan in 2003. “And in that time there have been two opposing players who have really stood out: Michael Jordan and Len Bias. Len was an amazing athlete with great competitiveness. My feeling is that he would have been one of the top players in the NBA.”

He was indeed that good.

The super star’s death left a deep and excruciatingly painful void in his native Washington, D.C., throughout basketball circles coast-to-coast and inside a Celtics organization that had counted on him to be the foundation of its future.

A Star Is Born

Twelve years after Bias’ death, just past the midway point of a dreary 36 – 46 Celtics campaign during the 1997-98 season, a young man named Jayson Christopher Tatum was born in St. Louis.

He would go on to become a high school legend at Chaminade College Preparatory School, a five-star recruit, ultimately landing on Kryzewski’s 2016-17 Duke team where he averaged 16.8 points.

“Jayson was so polished,” Krzyzewski told the Boston Globe’s Adam Himmelsbach in April 2018. “The game came so easily to him, and we saw right away what he had a chance to become.”

After a one-and-done season in Durham, the 6’8, 208-lb. forward entered the 2017 NBA draft where he was selected with the third overall pick by the Celtics. Tatum’s rookie campaign did not disappoint, averaging 13.9 points and five rebounds as Boston won 55 games despite Gordon Hayward and Kyrie Irving, the team’s high-profile acquisitions, missing much of the season due to injury.

Now, less than two seasons into his NBA career and with the Celtics yet again hurtling towards the playoffs, there is no question Tatum has great promise. But separated by more than 30 years in Celtics lore, can he fulfill the shattered legacy left behind by Bias?

“Tatum was projected to be the most NBA-ready scorer in his draft class,” said Bucher. “Now, he lived up to that billing and then some, but there’s some question as to just how close he is to his ceiling. That question exists among GMs in the league right now, a majority of whom would put Donovan Mitchell’s untapped potential as higher.”

As CelticsLife.com noted in August 2018, comparing the two is “challenging,” with Bias getting the nod on athleticism and attacking the rim, Tatum the upper hand in deep range shooting, and giving their defensive abilities a push based on the current body of evidence.

Is this alley-oop from Rozier best dunk of Jayson Tatum's career? https://t.co/rj4C03654x pic.twitter.com/Sl2pfW1wdz

SI’s McCallum, however, while noting both players bear similar talents, sees each as the classic forwards of their respective generation.

“There are so many threes being shot today that guys like Tatum are incredibly valuable—tall, can get out to guard the three, can guard multiple positions and can shoot the three himself,” he said. “He’s the archetypal forward of his time, and Bias, a scorer/rebounder, was the archetypal forward of his time.”
Bucher suggests the biggest differentiator may be on the defensive end.

“It’s easy to imagine Bias developing into as fierce a defender as he was an offensive player,” he said. “The challenge for Tatum is finding the position he can consistently defend. He is not quite quick enough to lock down the most dynamic threes, nor the most physical fours. But in my mind’s eye, I see opponents trying to figure out how to match up against Bias, as opposed to (Celtics coach) Brad Stevens finding matchups for Tatum to exploit.”

Whether it’s MJ vs. LeBron, Montana vs. Brady, Ali vs. Tyson or Mays vs. Bonds—comparative analysis tends to be a necessary evil in evaluating sports today. But it’s of course highly subjective and even more difficult when examining players of different eras.

Jayson Tatum on what he wants to accomplish in his career:

Are Bias and Tatum similar players separated by a generation? Is one fulfilling the other’s lost promise? Perhaps both, maybe neither, dependent upon whom you ask. Projections are vexing—Chris Washburn was supposed to be Shaq before Shaq and no one knew Kawhi Leonard would be one of the best players of his generation. In this case, it’s impossible to precisely discern since Bias never stepped on an NBA hardwood and the two men never played against one another.

What we do know is that Bias is considered the best basketball player never to compete in the NBA, while Tatum is a young and extremely gifted talent who is full of potential. And barring injury, whether it’s unwittingly fulfilling an unfulfilled legacy or just helping deliver another championship to Boston—unless he’s traded the New Orleans Pelicans for Anthony Davis—Tatum has the opportunity the reach heights that were seemingly ordained for Bias and then tragically ripped away by his death.