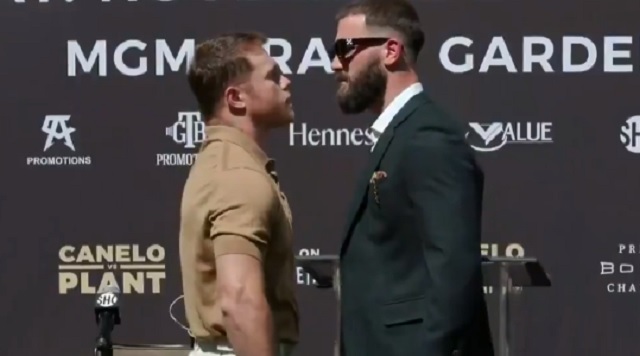 Canelo Alvarez and Caleb Plant already got heated before their fight on November 6th live on Showtime PPV .

During their first faceoff, the two boxers exchanged punches while meeting the media in Los Angeles.

Apparently, Plant got cut by Canelo’s punch and was bleeding profusely during the rest of the press conference.

Been to literally hundreds of boring press conferences. Never seen an exchange like that, and especially for a fight like this. That’s a big gash under Plant’s right eye, and it’s bleeding profusely. A cut like that in training usually postpones fights

Caleb Plant has suffered a serious cut as a result of his brawl with Canelo Alvarez at the start of their press conference… pic.twitter.com/e7oopSAH8u

They are now tending to Caleb Plant, who has a cut under his right eye. Just in case anyone thought the skirmish w/ Canelo was staged. These two truly do not like each other. #CaneloPlant pic.twitter.com/5nhcy9YkV8

Canelo already with the 10-8 round before the fight. Caleb Plant already has pulling out in his mind 😂😂 pic.twitter.com/6mX8zKmZc3

Later in the presser, Plant accused Canelo of being a drug cheat for being associated with trainer Eddy Reynoso, whose fighter Oscar Valdez was recently involved in a scandal after testing positive for a banned substance.

Canelo “Don’t call me a motherfucker,don’t talk about my mom”

Canelo and Plant are set to face off on November 6th on Showtime PPV.

Pound-for-pound king @canelo looks to capture undisputed status for the first time in his career against @calebplant 11/6 on @Showtime PPV.#AlvarezPlant pic.twitter.com/498KkV0IOq