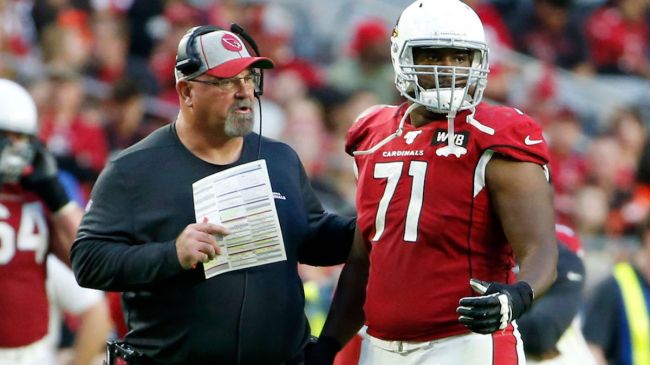 ESPN has learned that Arizona Cardinals offensive live coach Sean Kugler was relieved of his duties after he allegedly groped a woman in Mexico City.

According to the report, the Cardinals fired Kugler on Monday after they were alerted by Mexican authorities of the alleged incident, which happened the night before.

Kugler is the second Cardinals assistant coach to be accused of assaulting a woman this year. In May, former running backs coach James Saxon turned himself in to Indiana police after assaulting a woman in her Indianapolis home. He was sentenced in October to one year in jail, which was suspended, and given one year of probation.

Saxon kept his job with the Cardinals until his arrest became public Aug. 4, when he was put on administrative leave. Saxon resigned in October. [via ESPN]

The Cardinals were in Mexico City for a Monday Night Football matchup at the iconic Estadio Azteca against the San Francisco 49ers, which they ultimately lost by a score of 38-10.

Given the issues with his coaching staff, the poor play of the team (they’re currently 4-7 after making the NFC playoffs last season), and most notably, the regression of franchise quarterback Kyler Murray, it very much feels as though head coach Kliff Kingsbury is coaching his last season in Arizona.

To close out their 2022 season, and perhaps Kingsbury’s tenure with the team, the Arizona Cardinals will face off against the Los Angeles Chargers, New England Patriots, Denver Broncos, Tampa Bay Bucs, Atlanta Falcons, and San Francisco 49ers.

RELATED: Hall Of Fame QB Troy Aikman Put The Arizona Cardinals On Blast After Loss Against The 49ers