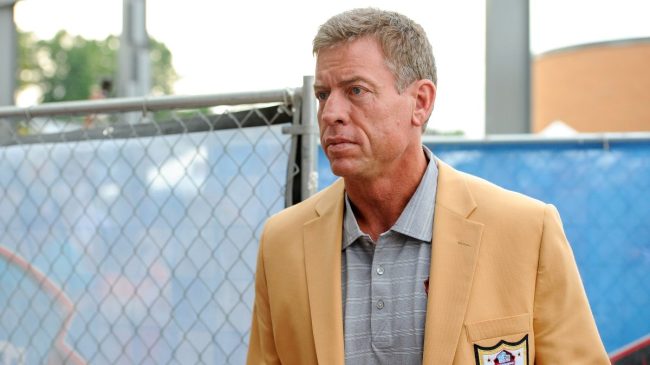 The Arizona Cardinals had no answer for the San Francisco 49ers on Monday Night Football. They looked lackluster throughout most of the contest as they ended up losing 38-10. With that in mind, NFL Hall of Famer Troy Aikman didn’t hold back in criticizing the team. Especially on George Kittle’s touchdown.

According to Awful Announcing, Aikman blasted the Cardinals. Specifically defender Antonio Hamilton. Kittle caught the ball at about the 30-yard line and ran all the way into the end zone. However, Hamilton looked like he was in position to make a tackle, but pulled up in the last second. For that reason, Troy Aikman blasted Arizona’s defense.

“This is embarrassing for the Arizona Cardinals … Antonio Hamilton doesn’t come up after all the tackles he made last week and even *try* to make an attempt on George Kittle… They’re a losing football team, and they’re playing like one on that play.”- Troy Aikman 🏈 #MNF pic.twitter.com/ahpDHvcPRv

It was extremely odd to see nobody make an attempt to tackle George Kittle. The touchdown was the final score of the game, as it put the 49ers up 38-10. Perhaps the Cardinals simply gave up and just wanted to get out of there. Even so, it’s odd t see someone make zero effort in making a tackle. Especially someone like Antonio Hamilton who has been incredibly active this season.

Either way, the Cardinals will have a chance to bounce back. With a 4-7 record, it’ll be interesting to see if Arizona can get back on track. Time is running out as the playoffs slowly grow near. If they hope to turn things around, they’ll need to provide much more effort moving forward.