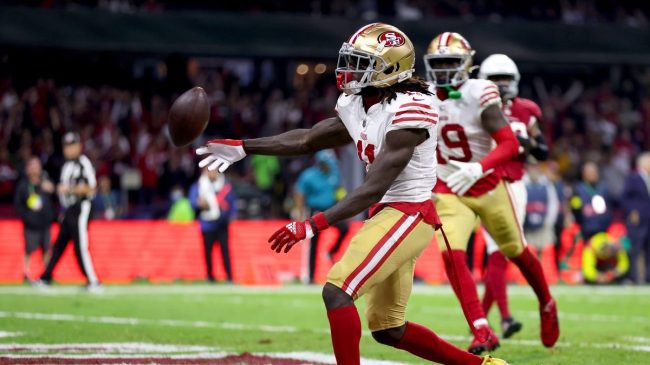 The San Francisco 49ers routed the Arizona Cardinals on Monday Night Football. Wide receiver Brandon Aiyuk had just two receptions but reeled in two touchdowns on the night. One of which, he accidentally drilled a cameraman with the ball.

In case you missed it, Sports Illustrated shows an angle of one of Aiyuk’s touchdowns. You can see the 49ers wide receiver throw the ball, however, it hits a cameraman in the no-no zone. You can see Brandon Aiyuk immediately regret his decision. All while teammate Deebo Samuel gets right in his grill celebrating the touchdown.

Hey, at least the 49ers acknowledged it happened. A few players ran up to the cameraman to see if he was okay. Luckily, he didn’t suffer any serious injuries, per Matt Maiocco. He provides a full update about the cameraman avoiding the ball from hitting his “business.”

Update: Thankfully, Nick Schebetta was on the ball and moved his mid region just enough as Aiyuk’s throw was coming at him to avert a severe injury to his … well, you know.

Oh, and Nick was already playing hurt Monday night due to food poisoning. Give that man a game ball! https://t.co/IAEFihDKlP

We’re just glad the cameraman is okay. Additionally, maybe the 49ers wide receiver might think twice before throwing the ball like that after scoring a touchdown. We’ll see if Brandon Aiyuk learned his lesson in Week 12, as San Francisco takes on the New Orleans Saints.