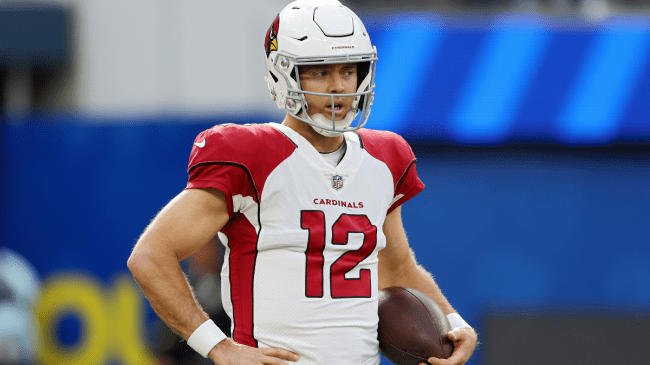 Colt McCoy will make his second consecutive start for the Arizona Cardinals as quarterback Kyler Murray continues to nurse an injury. The veteran passer will face off against San Francisco in Monday night action as he looks to lead his team to a division win.

Last week, we saw McCoy lead the Cardinals against the Rams, who also happened to be missing their starting quarterback. The result was a 27-17 upset that was much more exciting than many originally anticipated. McCoy threw for 238 yards in that win, providing a boost under center for Arizona.

He’ll look to keep the momentum rolling against the 49ers.

With McCoy landing the start, he received a bit of pregame press ahead of MNF action. The ESPN crew showed a pair of clips featuring the Arizona signal caller and San Francisco’s Jimmy Garoppolo as they showcased the quarterback matchup before the game. Fans are now clowning McCoy for his appearance in comparison to his opponent.

The video first follows Jimmy G on his way to the locker room ahead of the matchup. As is to be expect with Garoppolo, he’s dressed to the 9’s with a tailored rosé colored suit, fresh haircut, and loafers. McCoy’s appearance couldn’t have been more different.

The Arizona passer looks more like he’s just left a fishing competition as opposed to a primetime football matchup. His apparent sunburn only adds to the hilarity.

Fans on social media were quick to chime in with jokes and reactions to McCoy’s appearance.

One person wrote, “Colt McCoy coming to fix your internet connection,” after seeing the clip. Another commented, “Colt McCoy on his way to teach World History.”

Check out a few more reactions below.

He had to convince some people that he was actually on the team. McCoy made sure to wear his lanyard as to not be confused for someone else.

Colt got his lanyard on to get in like hey I swear I’m on the team 😂 https://t.co/KhVFk0IE8g

McCoy and the Cardinals will look to make more of a statement on the field than off it when facing Garoppolo and the Niners. He’ll get the last laugh should they pull out a win.